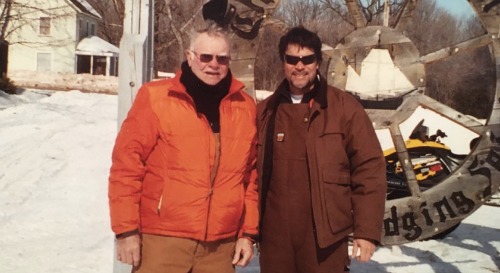 Days of Our Lives alum Peter Reckell (Bo Brady) has suffered a heartbreaking loss. His wife, Kelly Moneymaker revealed on Twitter that Reckell’s father has died. Keep reading to find out the details. Reckell has been living in New Zealand with his wife and daughter. Fans might remember that the family made a short film during the coronavirus quarantine. It was well-made and had fans wanting more.

Peter Reckell Traveled Back To US To Say Goodbye

The Days of Our Lives alum did manage to travel back to the United States from New Zealand. Thankfully, he was able to get there to say goodbye before his dad dies. Those that have lost a loved one know how painful a family death can be. When you are unable to say goodbye or you get there too late, it is that much more agonizing.

Bo Brady’s portrayer recently suffered the loss of his father, Russ Reckell. He died on June 27, 2020. It was a peaceful death, according to Moneymaker. She wrote on Twitter that Russ passed away peacefully and surrounded by loved ones.

“⁦@peterreckell⁩ ‘s dad, Russ Reckell, departed peacefully and surrounded by love on June 27, 2020. Peter traveled safely back to MI to say his final goodbye. This is a pic from happier days when the Reckell men took a snow-machine trip together,” she wrote, along with a red heart emoji and “4Ever.”

Unfortunately, Reckell also lost his mother not too long ago. Barbara Reckell died just last year. At the time, the actor wrote on social media,

“My mother was a powerful, compassionate, creative, giving person who will be missed by the many people she touched in her life. Thanks for all the loving thoughts. My family has pulled together to help each other and my father in this difficult time.”

Reckell remains a fan-favorite, even though his character died on the NBC soap opera. That was five years ago. In fact, Reckell came back to the show just so his fans could have closure. Once Bo saved Hope Brady (Kristian Alfonso), he died from an inoperable brain tumor literally days later. He passed away in Hope’s arms.

However, with all the dead characters coming back lately, fans hold onto the possibility that one day Bo might return also. It doesn’t seem likely right now, but fans can hope! We offer our condolences to Peter Reckell and his family at this time. Be sure to catch up on everything happening with DOOL right now. Come back here often for Days of Our Lives spoilers, news, and updates.

⁦@peterreckell⁩ ‘s dad, Russ Reckell, departed peacefully & surrounded by love on June 27, 2020. Peter traveled safely back to MI to say his final goodbye. This is a pic from happier days when the Reckell men took a snow-machine trip together. ❤️4Ever pic.twitter.com/12MBH2Oz08