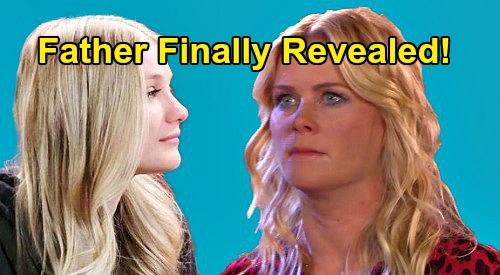 Days of Our Lives spoilers say that Allie Horton (Lindsay Arnold) is soon going to be in for a big surprise. Allie seems to think that she’s going to breeze through her pregnancy without her mother Sami Brady (Alison Sweeney) finding out about the whole thing. Well, Allie will have another thing coming when Sami blows back into Salem. Sami will make her reappearance in town on Tuesday, June 14th, and Allie will finally have to face her mom.

As DOOL viewers know, Allie has big plans, as she currently wants Rafe Hernandez (Galen Gering) to adopt her baby. But Rafe isn’t sure that this is what he wants right now.

Rafe is still grieving the loss of David Ridgeway (Kyler Ends), and he’s not at all sure that he wants to even try to adopt his ex-wife’s grandson. That would be a really tricky situation, and at any rate, Rafe needs to decide what’s right for him.

And then there’s Will Horton (Chandler Massey) and Sonny Kiriakis (Freddie Smith), who desperately want to adopt Allie’s baby. It seems that everyone has a plan for this kid, but so far everyone has been pretty much tiptoeing around the one thing that could come back to bite in a very big way for Allie down the line…the baby’s father.

Now, Lucas Horton (Bryan Dattilo) has attempted to have a dialogue with Allie about the father of her baby, but that pretty much fell flat, as Allie got upset and everyone told Lucas to back off.

But Lucas is clearly worried that the father may show up at some point and exert his rights. Lucas seems to be of the mind that it would be better to deal with the father up front and avoid any surprises later.

Nicole Walker (Arianne Zucker) also tried to have a conversation with Allie about her baby daddy, and Allie seemed to be willing to open up. In fact, Allie was about to disclose something critical about the father when she and Nicole got interrupted.

So, clearly there’s something about this father that Allie is holding back – maybe something in addition to simply his identity.

Well, we suspect that Sami will have something to say to Allie about her decision to cut the father out of any decision-making regarding the baby. Sami knows from first-hand experience from back when she had Will that trying to keep a father away from his baby, like she did with Lucas, doesn’t always result in the desired outcome.

And Sami probably won’t be willing to back down from Allie when Allie gets upset during a discussion in the way that Lucas did.

Sami might not handle Ali very delicately, but she might have more luck in having a baby daddy discussion with Allie than everyone else has. In fact, it might just take a major confrontation for Allie to disclose who the father is and exactly why she hasn’t wanted to talk about him with anyone.

We could see Allie and Sami get into a major argument and Allie blurt out the truth about her baby’s father, for example.

We’ll see what happens here, but if anyone will be able to get the truth out of Allie, it seems like it would be Sami. Sami could even resort to tactics like threatening to go track down Allie’s old roommate and get the truth from her.

Do you think Sami will drag the name of the baby’s father out of Allie? Stay tuned to the NBC soap and remember that we’re here for you with all the latest Days of Our Lives spoilers and news. Also, remember to check out CDL’s daily DOOL recaps as well!