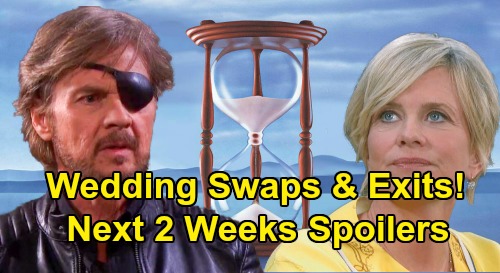 Days of Our Lives (DOOL) spoilers for the next two weeks tease that more wedding turmoil’s ahead, but it won’t be quite so dangerous this time. During the week of July 6-10, Justin Kiriakis (Wally Kurth) will find out Steve Johnson (Stephen Nichols) wants Kayla Brady (Mary Beth Evans) back. Since Justin’s already been battling some doubts, this will seal the deal on him calling off the wedding.

Justin will stop the ceremony eventually and let Kayla know she still has a chance at happiness with Steve. Once Justin tells Kayla that Steve still loves her and wants to reunite, Kayla’s silence will speak volumes. That’ll be all the confirmation Justin needs to know Kayla wants Steve, too.

Later, Kayla will reconcile with Steve and take off on a trip with him. They’ll both think they could use a break after all the chaos happening in Salem. Back with Justin, he’ll be blown away when Adrienne Kiriakis (Judi Evans) is seemingly standing in front of him.

Justin’s bound to be disappointed when he realizes it’s Bonnie Lockhart (Judi Evans) instead.

Next, Claire Brady (Olivia Rose Keegan) will prove she’s quite the caring “Claire Bear” and offer to help pick out an engagement ring for Ciara Brady (Victoria Konefal). Ben Weston (Robert Scott Wilson) will hear Claire out, but he should have some reservations about letting Claire assist with something so huge.

Over with Gwen (Emily O’Brien), she’ll get hot and heavy with Jake Lambert (Brandon Barash) again. Gabi will be livid when she finds them just after doing the deed. Days spoilers say Jake will be half-dressed along with Gwen, who’ll be wearing Jake’s shirt.

Once Gabi wraps her head around what’s in front of her, she’ll unleash her fury. Gabi will be appalled with Jake for finding out he’s a married man and then hopping in bed with another woman.

During the week of July 13-17, Gabi will manage to get the memory serum for Jake with Kate’s help. Jake will get injected with a dose and grow impatient as he waits for the serum to take effect.

Gabi will be just as frustrated by how long it’s taking, so that should lead to more bickering. While Gabi hopes for Stefan’s memories, DOOL spoilers say Sami will blow back into town with a July 14 airdate. She’ll cause quite a fuss at Eric Brady (Greg Vaughan) and Nicole Walker’s (Arianne Zucker) action-packed nuptials.

The wedding reception will be ruined thanks to Nicole and Sami’s cake fight, but Nicole will have a lovely wedding night with Eric later. Days of Our Lives spoilers say Eric and Nicole will thoroughly enjoy becoming husband and wife. Over with Jack Deveraux (Matthew Ashford), he’ll be stunned by a familiar face.

Jack will definitely be rattled as he deals with a Bonnie bombshell.

Elsewhere, Sami will make more waves as she blasts Allie and everyone else who kept her out of the pregnancy loop. Rafe will also get a fierce warning to turn Allie’s adoption offer down or else.

While on their trip together, Steve and Kayla will enjoy a romantic reconnection. “Stayla” fans deserve to see the reunion aftermath – and thankfully, they will.

Once Days offers a little taste of Kayla and Steve’s fun, they’ll spend the rest of their trip off screen. There’s no confirmation on when Steve and Kayla will be back, but it does look like this will be an extended vacation.

The next two weeks should be packed full of DOOL drama. Stick with CDL for the hottest Days of Our Lives spoilers, updates and news!