Days of Our Lives Spoilers: Anna Trash Talks Stefano – ‘Steve’ Explodes In Rage In Front of John and Tony 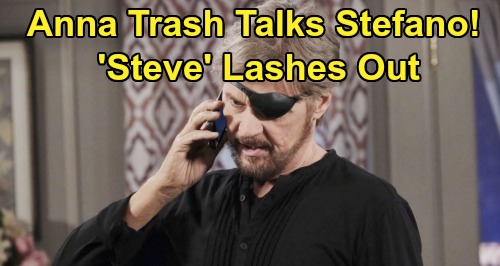 Days of Our Lives (DOOL) spoilers tease that “Steve Johnson” aka Stefano DiMera (Stephen Nichols) will run into some snags while on his mission with John Black (Drake Hogestyn). This is part of his plan to fake John’s death as well as Marlena Evans’ (Deidre Hall) demise. However, loudmouthed Anna DiMera (Leann Hunley) will nearly trip Stefano up!

For starters, Stefano and John will bump into Anna along with Tony DiMera (Thaao Penghlis) during their travels. Obviously, Stefano knows exactly where he is. There’s no point to this “search” for Stefano at all other than it’s a setup for John. Nevertheless, “Steve” will pretend their following Stefano’s trail and will keep delivering fake clues.

What Stefano didn’t anticipate was Anna pushing his buttons! As far as Anna’s concerned, Stefano should stay out of the picture and as far away as possible. Tony will assure John and “Steve” that he’s willing to help find his father, but Anna will put up a fight. She’ll start ranting about how awful Stefano is and how his children are better off without him.

Days spoilers say Anna will keep going on and on. She’ll do some serious Stefano trash talking here! Anna will drag Stefano’s name through the mud before insisting he’s nothing but a coward. DOOL fans can expect Stefano to finally decide he’s had enough. The problem is Stefano is stuck in “Steve’s” body and needs to keep the charade going.

Once Stefano hits the roof, he’ll react impulsively. Days of Our Lives spoilers say “Steve” will blow his top and demand Anna’s silence. He’ll snap in a very out-of-character way that leaves Anna, Tony and John wondering what’s up.

“Steve” may soon realize his mistake and backtrack a bit. He’ll probably apologize or at least suggest that he’s just ready to get this Stefano search done. Regardless, this will just be one more blunder for John to think back on later. The suspicions will eventually start adding up for “Steve’s” loved ones.