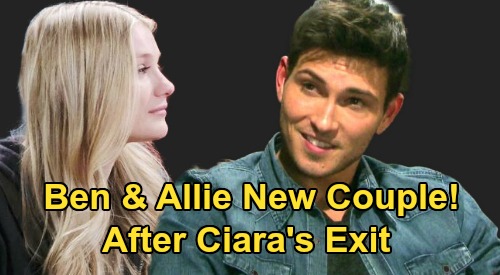 Days of Our Lives (DOOL) spoilers tease that Ciara Brady (Victoria Konefal) is headed out the door. DOOL insiders insist Ciara will be making her onscreen exit in the coming months, so some rough times are looming for Ben Weston (Robert Scott Wilson) It’s a shame to see “Cin” crumble after everything they’ve been through together, but soap romances don’t usually last forever.

However, Robert Scott Wilson is a handsome guy who could undoubtedly sizzle with other leading ladies. We can think of an interesting one that seems like a good possibility. What about pairing up Ben and Allie Horton (Lindsay Arnold)? Let’s look at why it just might happen.

In an interview with Soap Opera Digest, Lindsay Arnold talked about the auditioning process for Days of Our Lives. Arnold admitted that she was sick and couldn’t fly in from New York right away, but they eventually worked it out. “I ended up going in the next week to read with one of the other actors on the show [Robert Scott Wilson, Ben] and met with some of the producers,” Arnold said.

Notice that Arnold read with Wilson to score the part, which is interesting. Sometimes reading with a particular actor doesn’t mean anything, but other times it means everything! This could be a sign that DOOL has a storyline in store for Ben and Allie.

Although Allie has a young face and is treated like a child by her parents, she’s an adult woman who graduated college. Allie’s meant to be in the same age range as Ciara and Claire Brady (Olivia Rose Keegan) at this point. It’s easy to imagine Ben getting together with single Allie down the road. There’d be several ways for Allie and Ben to bond.

If Allie gives up her baby as planned, she may feel a void despite her firm decision. There’ll likely be a hole in Allie’s heart that she has to fill in some way. Ben could end up in the same boat once Ciara departs, so he could offer Allie comfort and get some in return.

Of course, Days could have Allie keep her baby and perhaps let Ben pitch in with raising him or her. Ben’s great with kids, so he might lend a helping hand if Allie gets overwhelmed. Since Ben can’t be in David Ridgeway’s (Kyler Ends) life, this might be the next best thing.

Can you imagine the fit Sami would throw over Allie dating a serial killer who tried to murder Will? That’d bring some fantastic drama! There’s no guarantee Ben and Allie will become a couple, but they certainly have the potential to become one. Days might at least test the waters on an Allie and Ben pairing.