Days of Our Lives Spoilers: Major Exits and Departure Details – Complete List of Who’s Leaving DOOL, When & Why 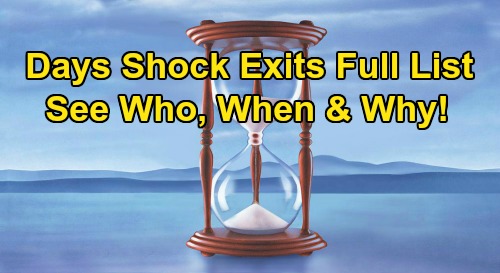 Days of Our Lives (DOOL) spoilers tease that several important exits are coming up, so we’ve got the scoop on what to expect. It’s a good idea to put all the departure details in one place and lay out the timeline. We’ll offer updates as more news becomes available, but here’s everything we know so far.

First, let’s talk about Olivia Rose Keegan (Claire Brady). This is an interesting departure because although Keegan is leaving the show, Claire will stick around. The part of Claire has been recast, so a new actress will begin playing the role following Keegan’s exit this August.

Next, we should address Will Horton (Chandler Massey) and Sonny Kiriakis’ (Freddie Smith) joint Days of Our Lives exit. It looks like Sonny and Will’s last episode will air on August 31, so that’s when you can prepare for a tough “WilSon” farewell. Something takes Will and Sonny off canvas in a hurry – and it probably isn’t good!

Galen Gering (Rafe Hernandez) filmed his last episode around the same time as Smith and Massey, so Rafe will leave by the end of August or early September. Gabi Hernandez DiMera (Camila Banus) will also leave Salem behind, so she may exit for the same reason as Rafe. It seems likely Eduardo Hernandez’s (A Martinez) brief return will set up Rafe and Gabi’s departures.

As for Victoria Konefal (Ciara Brady), it looks like her final airdate is coming up around late September. The role hasn’t been recast at this point, so Ciara should find some reason to depart Salem down the road.

Finally, Days of Our Lives spoilers say there’s Kristian Alfonso (Hope Brady). If you’re expecting some epic sendoff to honor Alfonso’s 37-year history with Days, you’ll be disappointed. Alfonso won’t be returning to film new episodes, but the show reportedly didn’t know that when she last filmed before the shutdown.

In other words, Hope should simply be there one minute and gone the next. It sounds like another character may have to explain why Hope left town. Depending on how Ciara exits and where she ends up, perhaps Hope will join her daughter.

Tracking down Rafe for an offscreen happily ever after is another option for Hope. Regardless, Alfonso’s last episode should air in early October.

That’s it for all the major Days exits and departure details – at least so far! There are bound to be even more casting DOOL shockers, so visit CDL often for the latest Days of Our Lives spoilers, news and updates.