Days of Our Lives Spoilers: Will & Sonny Fans Speak Out on ‘WilSon’ Exit – Chandler Massey & Freddie Smith Out at DOOL 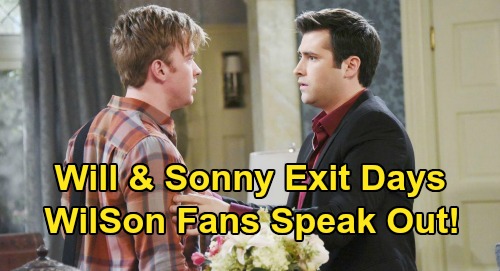 Days of Our Lives (DOOL) spoilers reveal that “WilSon” fans are still reeling from the news that Will Horton (Chandler Massey) and Sonny Kiriakis (Freddie Smith) will be leaving Salem as they are both out. When Galen Gering (Rafe Hernandez) confirmed he’d be exiting the canvas, we warned you that other cast cuts would be coming. Massey and Smith are the latest DOOL stars who are being forced to leave the NBC soap behind.

On Twitter, both actors expressed gratitude to viewers and for the content they were given while at Days. They’re off contract and will be written out, but they’re taking loads of memories with them. “I will miss Salem so much!!” Smith said. “Thank you all for the incredible love and support throughout the years. I really feel we told a love story that will live on forever.”

Massey echoed that idea. “Wish it weren’t coming to an end, but I will be forever grateful to everyone who went on this journey with us,” Massey tweeted. Naturally, this has plenty of Days of Our Lives watchers upset. It’s disappointing to see any great characters go, but DOOL is also losing their only LGBTQ representation.

Evan Frears (Brock Kelly) will already be long gone by the time Will and Sonny make their exits, so it’s easy to see why this decision has brought complaints. However, reliable Days insiders suggest that there’s actually been some pushback from execs regarding the kind of stories DOOL Head Writer Ron Carlivati wants to write for his LGBTQ characters. This certainly isn’t Carlivati’s fault.

Many Days viewers rejoiced when Will was brought back from the dead, so this is sad news indeed! “WilSon” supporters have definitely been speaking out on Twitter. One disappointed fan said, “EXCUSEEEEEEEEEEEEEE ME? No Will did not come back from the dead, just [to] leave again. So can someone explain to me why or who’s decision it was to let #Wilson go? Just so I know who I need to properly scream at.”

“This decision is a HUGE mistake,” another Days of Our Lives fan insisted. “Not having WIll and Sonny on the show will only hurt it – not help it.” “So so sad,” said one more fan about these updates. “But Thank you for all the years you have spent giving us the beautiful story of Wilson.”

Of course, there’s always a chance Will and Sonny will return in the future, and they still have several filmed months of airtime left to play out onscreen. Days of Our Lives spoilers say even more casting cuts are coming, so we’ll give you updates on those as more news emerges.

Days of Our Lives releases Freddie Smith and @ChandlerMassey from contracts. https://t.co/dMOErFKz2b
I will miss Salem so much!! Thank you all for the incredible love and support throughout the years. I really feel we told a love story that will live on forever.

Wish it weren’t coming to an end, but I will be forever grateful to everyone who went on this journey with us. https://t.co/Wv0ZfQwFGo