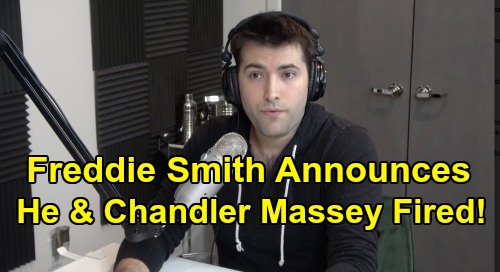 Days of Our Lives spoilers confirm what we have all been fearing. More actors are being let go. Freddie Smith, who portrays Sonny Kiriakis posted a video on YouTube today telling his followers that his contract was released, in other words he is fired. He said along with Sonny, Will Horton (Chandler Massey) will also be leaving Salem meaning Chandler Massey was also released from contract and fired. Find out when their last episodes will air and watch the video for yourself.

Recently, we let you know about Galen Gering, who plays Rafe Hernandez leaving the NBC soap. At that time, it was expected more actors would be let go and now it’s beginning.

It is confirmed that the show’s first gay couple, “Wilson” will either be leaving or could be recast. However, recasting hasn’t worked out too well for the show in the past. So, it’s pretty clear Will and Sonny may leave Salem.

DOOL spoilers reveal Smith posted the news on YouTube, which you can watch right here. In that video he seemed surprised and saddened by being let go. However, he also understands that it’s just show business and it isn’t personal.

Smith also said that in addition to him being released from his contract, so was Massey. What does this mean for Will and Sonny? Hopefully, it means that they will leave Salem together once the truth about the accident and Evan Frears (Brock Kelly) comes out.

When Could Will Horton and Sonny Kiriakis Leave Salem?

Days of Our Lives spoilers indicate the soap films eight months in advance. Smith said that he and Massey would not be filming any more scenes after this week. Then, he corrected himself and said they would not be on the schedule in the next couple of weeks. That puts Will and Sonny’s exit around October 2020. We are sad to hear about this news but wish both actors the best and perhaps they can return to Salem one day.

What do you think their exit storyline will be? How do you feel about Freddie Smith and Chandler Massey being released from their contracts? Who will be the next to go?