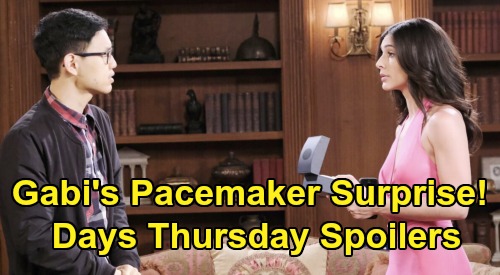 Days of Our Lives (DOOL) spoilers for Thursday, February 13, tease that Shawn Brady (Brandon Beemer) will face off with Princess Gina Von Amberg aka “Hope Brady” (Kristian Alfonso). DOOL fans know Princess Gina managed to trick Rafe Hernandez (Galen Gering) in Prague. She convinced him the real Hope had come back, but it was just Princess Gina showing off her impressive impersonation again.

With Kate Roberts’ (Lauren Koslow) help, Rafe was finally able to gain the upper hand. Of course, there’s still the matter of bringing Hope back to the surface. That’s where Shawn comes in!

Princess Gina insisted Hope was long gone, but Shawn will refuse to believe that on Thursday. Days spoilers say Shawn will look deep in Princess Gina’s eyes and appeal to his mom, who must be in there somewhere.

While Shawn tries to get through to Hope, “Steve Johnson” aka Stefano DiMera (Stephen Nichols) will pile on the lies. Kayla Brady (Mary Beth Evans) believes she’s helping her ex, but she’s actually helping the enemy!

Nevertheless, Kayla will find herself drawn to “Steve” thanks to Stefano’s act. She’s still furious with “Steve,” but she’d do just about anything to keep him safe.

Other Days of Our Lives spoilers say an important meeting’s on the way. Gabi Hernandez (Camila Banus) will have a crucial conversation with a man named Chris (Chaz Kao), who’s in the loop on all the pacemaker drama.

Chris will probably assure Gabi that Julie Williams’ (Susan Seaforth Hayes) new pacemaker is booby-trapped just like the old one. He may insist everything’s good to go.

Gabi should appreciate the positive updates as she gets ready for her nuptials. She has no intention of letting anything derail her wedding to Eli Grant (Lamon Archey), so she has to make sure everything’s squared away.

The ceremony’s set to kick off on Friday’s DOOL episode – and it looks like Gabi will believe she’s fully prepared for it.

In the meantime, Days of Our Lives spoilers state that Lani Price (Sal Stowers) will feel defeated. She’ll worry that nothing’s going to stop Eli and Gabi from tying the knot.

Lani will say a prayer and hope for the best, but she’ll definitely fear some bad news is looming. The last thing Lani wants is to hear Gabi announced as Eli’s wife, but the situation looks bleak.