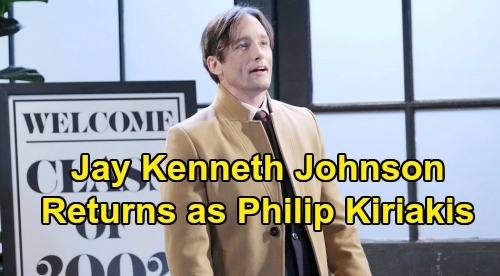 Days of Our Lives (DOOL) spoilers reveal that these are rather turbulent times at the NBC soap. DOOL fans were thrilled to hear about the show’s renewal, but now cast cuts are causing concerns. Galen Gering (Rafe Hernandez), Chandler Massey (Will Horton) and Freddie Smith (Sonny Kiriakis) are all on their way out of Salem.

Based on a recent Instagram story from Camila Banus (Gabi Hernandez), her Days future doesn’t exactly seem certain either. Whatever the case, Days of Our Lives spoilers say more cuts are still to come.

Things are starting to seem awfully gloomy, so we could use some happy news, right? The bright side of all the firings is that DOOL’s making room for big returns!

There’s no official confirmation just yet, but reliable Days insiders insist that Jay Kenneth Johnson will reprise his role as Philip Kiriakis. Of course, Johnson recently wrapped up a stint on the Last Blast Reunion series, which was featured on the DOOL app. Let’s look at what Johnson had to say in an interview with Soap Opera Digest around that time.

When asked if he’d consider making a full-time comeback, Johnson was hopeful and hinted about leaving his home in Missouri. “I think I would,” Johnson said. “I had a good time when I was out there. I’d like to get back to Los Angeles. I think that would be a great opportunity.” Johnson later thanked fans for all their support and said, “hopefully I’ll see you all very soon.”

Due to the success of the Last Blast Reunion series and Johnson’s willingness to make a deal with Days, it sounds like they reached one. Last year, we heard rumblings about a Philip return that were ultimately scrapped.

It didn’t work out for whatever reason, but then this DOOL app opportunity came along. That probably got the ball rolling on Johnson’s latest comeback to the main show.

Regardless, this return is a done deal based on insider reports. You can expect Jay Kenneth Johnson to arrive back in Salem down the road, so at least we’ve got some exciting updates to go along with all the glum departures.

Days of Our Lives spoilers say there’ll be other returns as well, so could some other Last Blast crew members resurface? Time will tell, but that seems like a good possibility. As more Days of Our Lives news emerges, you can check out all the latest updates here at CDL.