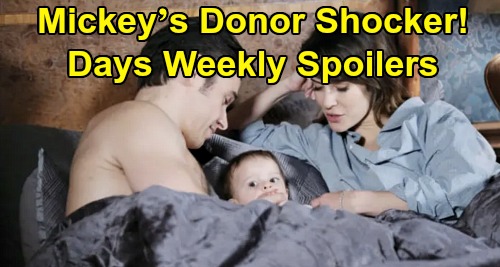 Days of Our Lives (DOOL) spoilers for the week of February 17-21 tease that some major wedding drama’s coming up. For starters, Lani Price’s (Sal Stowers) decision to crash the nuptials will make serious waves. Gabi Hernandez (Camila Banus) obviously won’t appreciate it, but Lani’s presence won’t be the biggest shocker at the ceremony.

DOOL fans can expect Julie Williams (Susan Seaforth Hayes) to keel over and prompt a big admission from Gabi. Will Julie be brought in the loop on the pacemaker plot beforehand? Julie’s been known to fake a medical crisis, which is why Gabi left her to die the last time she collapsed. It’d be fitting for Julie to fake it this time around and finally trip Gabi up.

We should also point out that Doug Williams (Bill Hayes) will be across town reminiscing about Bill Horton’s (Edward Mallory) death. After Jennifer Horton (Melissa Reeves) learns her father’s gone, she’ll reflect on Bill’s life along with Doug and Jack Deveraux (Matthew Ashford). It’ll be a special way to honor Doug’s 50 years on Days, but the point is he won’t be at the hospital tending to Julie.

That could indicate that Julie will indeed trick Gabi into making a public confession. Julie will eventually make an admission of her own, which could involve the truth behind this charade. Regardless, Days of Our Lives spoilers say Rafe Hernandez (Galen Gering) will have to place Gabi under arrest. Her blissful wedding day will turn into a total nightmare!

As for Eli Grant (Lamon Archey), he’ll be confused about why Lani kept this news from him. Lani was willing to tell Kristen DiMera (Stacy Haiduk) and JJ Deveraux (Casey Moss) the truth, so this won’t make sense to Eli. He’ll be upset over Lani’s deception, so she’ll do her best to smooth things over.

Other Days of Our Lives spoilers say Will Horton (Chandler Massey) and Sonny Kiriakis (Freddie Smith) will think back on last Valentine’s Day. They won’t be together as they reflect on romantic memories, but they’ll both remember better times. Will could get “WilSon” back on track if he’d just come clean, but he’s been dragging his feet because of the guilt Maggie Kiriakis (Suzanne Rogers) would feel.

Later, Sonny will confront Will and seek some updates. He won’t get why Will pushed so hard for a divorce and suddenly doesn’t seem eager to file the papers. Afterward, Will’s going to meet with Maggie and question her about the night of Adrienne Kiriakis’ (Judi Evans) crash. Even if Maggie doesn’t fully recall her role in the accident, Will might manage to spark a few memory flashes.

Over with Ciara Brady (Victoria Konefal), she’ll bring Ben Weston (Robert Scott Wilson) on her latest theory. Ciara believes David Ridgeway’s (Caleb and Kyler Ends) may have killed Jordan Ridgeway (Chrishell Hartley), so she’ll take steps toward proving it. Unfortunately, Ben will run into some trouble when Rafe tries to arrest him. Ciara will attack Rafe to thwart the arrest and buy a little more time.

Next, Kristen will dream of Rachel Isabella DiMera Black and struggle to figure out what it means. As for Sarah Horton (Linsey Godfrey), she’ll be grateful to learn a bone marrow donor match has been found. Sarah’s in for a shock when she realizes who it is – and the answer is most likely Tate Black (Colin and Kyle Schroeder).

Days of Our Lives spoilers say another exciting week’s ahead in Salem, so don’t miss all the action. There’ll be lots of news and updates to pass along as these DOOL stories heat up. Be sure to stop by CDL again soon and check out all the hottest Days of Our Lives info.