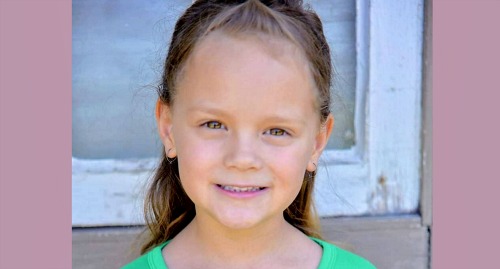 Days of Our Lives (DOOL) spoilers reveal that there’s a new Holly Jonas in town! As DOOL viewers might’ve noticed in the episode that aired May 5, Holly looked a bit different. Harlow and Scarlett Mallory previously played the part of Holly, but the role has been recast and is now being portrayed by Elin Alexander.

Alexander’s other acting credits include playing Anabelle in a short film called In the Absence of Eden and Maddie Baxter-West in a TV series called The Baxters. Now Alexander’s made her Days debut – and she’s doing a fantastic job! Those “Ericole” family scenes were downright adorable, and Holly was a huge reason why.

Nicole Walker (Arianne Zucker) knows Eric Brady’s (Greg Vaughan) been down over the death of his biological daughter. After Eric had an unsettling dream, Nicole treated him to a family picnic with Holly. It was a way to lift Eric’s spirits and remind him there are other wonderful things in life to remember.

The plan worked like a charm since Eric was soon smiling with Holly and showing off the video he made of her on the playground. No child could ever replace the real Mackenzie “Mickey” Horton in Eric’s heart, and part of him will always feel connected to Rachel DiMera Black, too. However, Eric still has a daughter in Holly, even if she’s not a biological one.

Holly proved that when she told “Daddy” that she loved him and prompted Eric to ask Nicole if she’d told Holly to call him that. Nicole assured Eric that she didn’t and gently reminded Holly that her daddy, Daniel Jonas (Shawn Christian), was in heaven. Holly insisted that she knew, but she was hoping Eric could be her daddy down here.

Since it was OK with both Eric and Nicole, Holly will be calling him “Daddy” now. Of course, this could set up a goldmine of drama when Holly’s older. Eric was responsible for the death of Holly’s father after he chose to drive drunk. It’s a decision that’ll haunt Eric forever and probably leaves him with some mixed feelings about being called “Daddy” by Holly.

However, the best way for Eric to honor Daniel and make it up to him is by being there for his little girl. Eric loves Holly with all his heart and has been a great fill-in dad, so there’s no reason he shouldn’t be “Daddy” to her. Holly’s too young to understand the details of the crash, so that can be some soapiness they save for when she’s eventually a SORAS’d teen!

As for Elin Alexander, we congratulate her on landing the part of Holly Jonas! Days of Our Lives spoilers say there’ll be more warm “Ericole” moments in the future, especially since wedding bells are just around the corner. As other Days news become available, we’ll pass along DOOL updates.