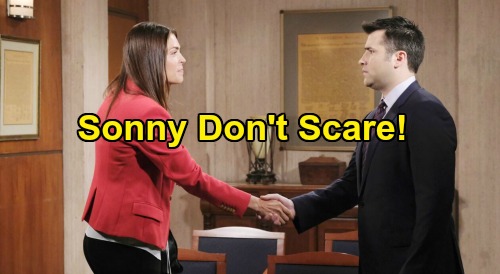 Days of Our Lives (DOOL) spoilers for Wednesday, May 6, tease that Lani Price (Sal Stowers) will continue to help Kristen DiMera (Stacy Haiduk). Kristen’s starting to wonder if maybe this was such a good idea. After all, Lani just got her job back at the Salem PD – and this could put her in an incredibly tight spot with Eli Grant (Lamon Archey).

However, Lani assured Kristen that they were in this together. Once Lani made the decision to offer assistance, she was all in. So far, Lani’s helped Kristen determine that Sarah Horton (Linsey Godfrey) is likely in Paris. Lani thinks Kristen’s getting a little ahead of herself, but she probably won’t feel that way for long.

It seems Lani’s going to use her resources and sleuthing skills to pinpoint a smaller search area for Kristen. Lani should soon be able to confirm that Sarah took Rachel DiMera Black to Paris and will hopefully narrow it down to that apartment, which belongs to Chad DiMera (Billy Flynn) and Abigail DiMera (Kate Mansi).

In the meantime, more tears will fall as Sarah explains Maggie Kiriakis’ (Suzanne Rogers) role in her daughter’s death. Sarah just touched on that, but she’ll offer more details to Rex Brady (Kyle Lowder) on Wednesday.

Days of Our Lives spoilers say Rex will have even more compassion for Sarah, but he may still argue that this isn’t right. Keeping Rachel would mean lying to this girl for the rest of her life.

Nevertheless, Sarah will be adamant about keeping Rachel for herself. She’ll cling to this life she’s built with “Mickey” and hope they can stay together forever. Since Kristen will be on her way to Paris before long, Sarah’s plan is about to get complicated! For now, Sarah will focus on the task at hand, which is deciding what to do with her hostage.

Days of Our Lives spoilers say Zoey will bully Sonny a bit and try to scare him before he testifies. Zoey’s veiled threats may leave Sonny uncomfortable, but he won’t be intimidated into backing down. Sonny will plan to tell the truth, the whole truth and nothing but the truth!

Orpheus (George DelHoyo) will become a far bigger issue for Zoey in the week ahead, so stay tuned for another round of abduction mayhem. Until then, there’ll be plenty of drama playing out at Statesville.

Maggie now knows Sarah’s baby died the night of the accident, so her world’s crashing down. She’ll face more guilt than she ever imagined, but she’ll be furious with Xander Kiriakis (Paul Telfer), too.

Xander will get slapped for his role in the baby swap, which made things so much worse for Sarah. Horrified Maggie will rage over being kept in the dark for so long. Days spoilers say Xander will leave Statesville with his tail between his legs, so he’ll just have to deal with his shame for a while.

We’ll deliver updates as other Days news emerges. DOOL fans won’t want to miss Wednesday’s exciting episode! CDL’s your go-to source for interesting Days of Our Lives spoilers, news and updates, do be sure to pop in regularly.