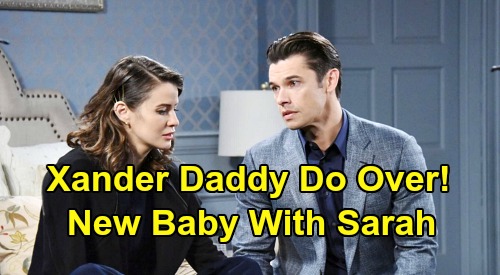 Days of Our Lives (DOOL) spoilers tease that Xander Kiriakis (Paul Telfer) deserves another chance! Many DOOL fans were heartbroken right along with Xander when the baby switch secret came out. Xander built a sweet life with Sarah Horton (Linsey Godfrey) and Mackenzie “Mickey” Horton, but it was all built on lies. In an effort to protect Sarah, Xander ruined his future with her.

Of course, Victor Kiriakis (John Aniston) deserves some of the blame here. If Victor hadn’t been so determined to protect Maggie Kiriakis (Suzanne Rogers), perhaps Xander wouldn’t have felt pressured into this. Regardless, it would’ve been better for Xander to have let Sarah grieve from the start.

Perhaps Xander could’ve grown closer to Sarah in her time of mourning. They still could’ve had their happy ending once the clouds parted. Instead, Xander not only delayed the inevitable, he made it so more people had to suffer.

Kristen DiMera (Stacy Haiduk) and Brady Black (Eric Martsolf) were stuck in great pain due to Xander and Victor’s actions. Haley Chen (Thia Megia) lost her life due to Kristen’s wild reaction. It all started with Xander and Victor’s scheme, so they deserve to pay for a while.

That’s especially true since Sarah’s struggling so much more due to her attachment to “Mickey.”

However, there’s no denying that Xander adores Sarah – just like he adored “Mickey,” who we now know is Rachel DiMera Black. Xander used to be a true villain once upon a time, but he’s a gray Days character now.

It’s clear that Xander did everything for Sarah out of misguided love. It certainly wasn’t the right way to handle all the drama, but Xander’s heart does make a difference.

It’s that heart and fierce adoration that Sarah felt in love with, so is there still a shot for “Xarah” down the road? Days of Our Lives spoilers hint that Sarah may soften in time, which could present a new opportunity for romance. It’d be nice to see Xander get a daddy do-over at some point.

Xander should be able to have his own child with Sarah – one that Eric Brady (Greg Vaughan) can’t shove him out of the picture on. It should also be one who doesn’t have to be returned to Brady and Kristen! It’d be great for Xander and Sarah to bring a new Kiriakis kid into the world.

Could Sarah forgive Xander and start a family with him one day? Will Xander eventually get a baby of his own? Plenty of Days fans are rooting for a “Xarah” fam! We’ll offer updates as other DOOL news rolls in.