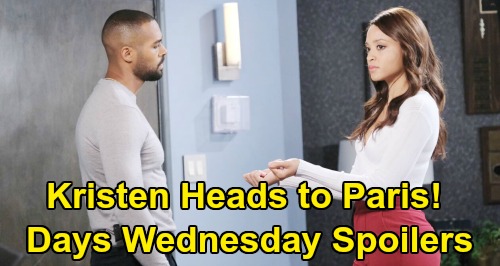 Days of Our Lives (DOOL) spoilers for Wednesday, May 6, tease that Zoey Burge (Kelly Thiebaud) will meet Sonny Kiriakis (Freddie Smith), who’s set to testify at Evan Frears aka Christian Maddox’s (Brock Kelly) trial. Since Sonny’s testimony could hurt Evan’s case, Zoey will do some preemptive damage control. She’ll put some scare tactics to good use in Wednesday’s episode.

DOOL fans can expect Sonny to be a bit unsettled, but he may not be quite as intimidated as Zoey hoped. If Zoey wants to get Evan off the hook, she’ll have to focus on selling the right story and making sure his remaining secret stays under wraps.

Of course, Sonny will end up being the least of Zoey and Evan’s problems! Orpheus (George DelHoyo) will put another kidnapping plot in motion next week, so maybe Zoey should worry a little less about Sonny and a little more about her devious dad. Days spoilers say the David Ridgeway (Caleb and Kyler Ends) will continue, so stay tuned.

In the meantime, Maggie Kiriakis (Suzanne Rogers) will reel over the bomb Xander Kiriakis (Paul Telfer) just dropped. Thanks to that blabbermouth inmate, Maggie grew suspicious enough to demand answers.

She assured Xander she’d find out one way or another, so Xander revealed that Sarah Horton’s (Linsey Godfrey) baby died and was swapped with Rachel DiMera Black.

Now that everything’s clicked into place for Maggie, she’ll slap Xander and rip into him for hurting so many people. It’ll hit Maggie that she caused the death of her own grandchild, so that’ll make her sorrow over the crash even worse.

Meanwhile, Lani Price (Sal Stowers) will hope to nail down Sarah’s location. Rex Brady (Kyle Lowder) didn’t have a chance to complete his voicemail, but Lani was still able to make another call and determine that he was in Paris for a medical conference.

However, that doesn’t narrow it down enough to ensure Kristen DiMera (Stacy Haiduk) will find her baby. Sarah could be anywhere in Paris, so maybe Lani can use her police resources to narrow it down even further. Kristen should be headed to that Paris apartment soon enough!

As for Eli Grant (Lamon Archey), he’ll be on a mission to locate Lani. Eli watched Lani leaving with Kristen on the Salem PD security footage, so he knows Lani’s the one who helped Kristen flee. That’ll definitely bring concerns about Lani getting tangled up in Kristen’s web.

Other Days of Our Lives spoilers say Sarah will continue her conversation with Rex. DOOL fans know Sarah’s been coming unhinged in that Paris apartment – especially since Rex just can’t seem to grasp the depth of her pain.

Rex pushed Sarah to reach out to her mother, which led to Sarah’s revelation that Maggie was the one who killed her child.

On Wednesday, Sarah will elaborate on that and share the emotional toll all this has taken. Fortunately, there’s more to the night of the accident. Days of Our Lives spoilers say there are still some shockers left to be exposed, so look for the whole truth to come out down the road.

As other Days news and updates become available, we’ll bring you up to speed. Do you think Sarah’s concerns about criminal Kristen are justified? Is this more about Sarah wanting to keep Rachel for herself? CDL will have other Days of Our Lives spoilers, updates and news to pass along, so stop by frequently.