Days of Our Lives Spoilers: Adrienne’s Alive – Did Rolf Bring Accident Victim Back From Brink of Death?

BY hellodrdavis on May 4, 2020 | Comments: Leave Comments
Related : Days of Our Lives, Soap Opera, Spoiler, Television 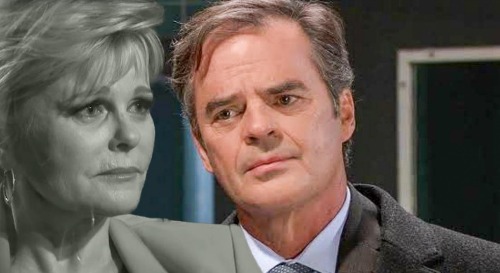 Days of Our Lives (DOOL) spoilers tease that viewers could be in for a big surprise where a popular character is concerned. It’s been about a year since Adrienne Kiriakis (Judi Evans) was tragically killed as she was driving Sarah Horton (Linsey Godfrey) to the hospital to give birth to her baby.

As DOOL viewers know, Maggie Kiriakis (Suzanne Rogers) was driving drunk that night and allegedly swerved into Adrienne’s lane, which resulted in Adrienne’s death. And although Adrienne’s lifeless body was shown on-screen for several minutes in the hospital, there’s always a chance that Adrienne could return.

In the era of Dr. Wilhelm Rolf (William Utay) and his back-from-the-dead serum, virtually anything is possible. Even though Adrienne’s family saw Adrienne’s body and said their tearful goodbyes, Rolf could always have snuck in later and injected Adrienne with his serum, much like he did to Vivian Alamain (Louise Sorel) after she supposedly died in the hospital.

Well, one thing that seems clear is that Judi Evans is returning to DOOL. Back in January, Wally Kurth, who portrays Justin Kiriakis, tweeted “Rest assured @TheJudiEvans is coming back” in response to a fan post about the show.

That got fans exited, and many naturally assumed that Judi would be returning as Bonnie Lockhart, the other character she played on DOOL.

Of course, it’s always possible that Judi will return as Bonnie, but given that characters routinely and miraculously come back from the dead on Days of Our Lives, we’d say that there’s at least a fighting chance that she’ll come back as Adrienne. And it would certainly make for great story material if Judi did.

Given that Justin has moved on (and rather quickly moved on) with Kayla Brady (Mary Beth Evans), Adrienne’s return would throw a big wrinkle into Justin and Kayla’s love story. Justin and Kayla are already dealing with having Steve Johnson (Stephen Nichols) in their lives, but to have Justin’s wife return from the dead would really put a strain on things.

Ultimately, Adrienne’s return could set the stage for Justin and Kayla to part ways to make way for both Justin/Adrienne and Steve/Kayla reunions. That’s something that would make a lot of fans happy, and there would be plenty of drama getting to that point.

But of course, if Adrienne does return from the dead, there would be a lot of loose ends that would have to be explained, since Rolf is currently in jail.

Where would Adrienne have been all this time? Where was Rolf keeping her? And what kind of condition will Adrienne be in, if indeed she does return from the dead? Knowing how inconsistently Rolf’s serum works, Adrienne could have amnesia or other ailments.

We’ll see what happens here, but there are certainly a lot of fans hoping that when Judi Evans returns, it will be as Adrienne. Of course, we’d take Judi as Bonnie as well, as she’s always a hoot, but given how beloved Adrienne is and how popular Adrienne and Justin were as a couple, it seems like that would be the more popular option.

Do you think that Adrienne will come back from the dead? Keep watching Days of Our Lives and we’ll keep you up to date on the latest DOOL news. Remember CDL is your place for all the sizzling DOOL spoilers!