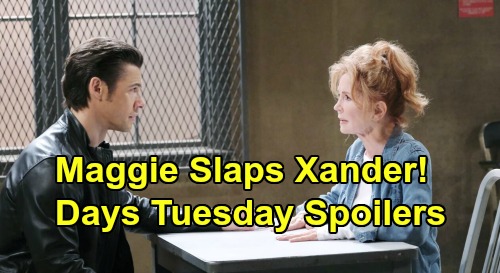 Days of Our Lives (DOOL) spoilers for Tuesday, May 5, tease that Xander Kiriakis (Paul Telfer) will pay Maggie Kiriakis (Suzanne Rogers) a visit at Statesville. Now that the baby switch secret has blown up, Maggie deserves to hear the truth. Victor Kiriakis (John Aniston) hoped to keep Maggie in the dark on her role in the real Mackenzie “Mickey” Horton’s death, but that’s just not realistic.

Since Maggie’s bound to get updates sooner or later, Xander will think it’s time to come clean. In the prison visiting area, Xander will tell Maggie the heartbreaking reason Sarah Horton (Linsey Godfrey) refused to marry him. Maggie will realize that she not only killed Adrienne Kiriakis (Judi Evans), she killed her own grandchild as well.

Days spoilers say Maggie will reel over the rest of the car crash story and the guilt it adds for her. Naturally, Maggie will be furious with Xander and Victor Kiriakis (John Aniston) for deceiving Sarah and stealing “Bristen’s” baby. This secret brought a world of devastation for Kristen DiMera (Stacy Haiduk) and Brady Black (Eric Martsolf).

Now it’s Sarah’s turn to suffer, so Maggie will unleash her wrath. It won’t be long until Maggie slaps Xander, and he absolutely deserves it! Xander’s heart may have been in the right place, but that doesn’t excuse the pain his actions caused.

Over with Eli Grant (Lamon Archey), he’ll battle suspicions about Lani Price (Sal Stowers). Eli will start to think Lani may have helped Kristen escape – and he’ll be exactly right. Days spoilers say Lani’s shady behavior will tip Eli off to trouble, so some friction’s coming up for “Elani.”

In Paris, Sarah will tie Rex Brady (Kyle Lowder) to a chair and gag him so he can’t scream. Rex will regain consciousness and realize he’s in quite a jam. However, Rex will once again try to talk some sense into Sarah after she removes the gag.

They’ll argue before Sarah starts opening up about Maggie’s involvement in the accident, which obviously makes Sarah’s sorrow even worse.

Other DOOL spoilers say Nicole Walker (Arianne Zucker) will cheer Eric Brady (Greg Vaughan) up with a picnic. Eric’s still upset over the loss of his biological daughter as well as the loss of Rachel. This was a double blow, so Eric will really appreciate a chance to enjoy some family bliss with Nicole and Holly Jonas.

It turns out Eric’s special day will get even more special thanks to Holly. Days of Our Lives spoilers say Holly will call Eric “Daddy” and tell him she loves him. It’ll mean a lot to Eric as he focuses on the future and tries to put this whole baby swap ordeal behind him. Eric may not be Holly’s bio dad, but he adores her just the same!