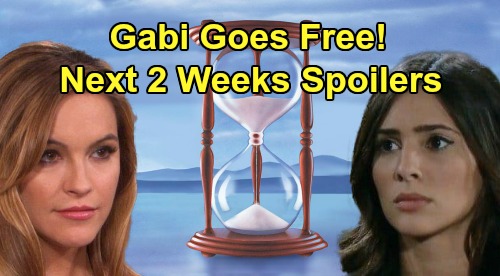 Days of Our Lives (DOOL) spoilers for the next two weeks, February 17 to February 28, tease that some stunning moments are coming up in Salem. During the week of February 17-21, Gabi Hernandez’s (Camila Banus) revenge plot will be exposed. Lani Price (Sal Stowers) will divulge everything at the wedding before Gabi gets into a huge right with Julie Williams (Susan Seaforth Hayes).

Soon enough, Gabi will admit Lani’s right and will crank the rigged pacemaker up to mess with Julie’s heart. Julie will collapse, but it’ll just be part of a charade for Gabi’s benefit. In the end, JJ Deveraux (Casey Moss) will explain that he short-circuited the pacemaker switch, which eliminated Gabi’s control.

After Rafe Hernandez (Galen Gering) arrests Gabi, she’ll feel backed into a corner. While Gabi gets updates on a plea deal, Kayla Brady (Mary Beth Evans) will be shocked by “Steve Johnson” aka Stefano DiMera (Stephen Nichols). “Steve” will reveal who he really is, so that’ll be a lot for Kayla to take in.

Kayla will ultimately have to be restrained before Rafe and Justin Kiriakis (Wally Kurth) go search for her. Across town, the Deveraux family will react to the news of Bill Horton’s (Edward Mallory) passing. His death will lead to JJ Deveraux’s (Casey Moss) exit since he’ll be joining the fam for the Africa funeral and won’t come back.

Over with Kristen DiMera (Stacy Haiduk), Days spoilers say she’ll be upset over a dream involving Rachel Isabella DiMera Black. It looks like Rachel will disappear from the hospital in this dream and leave Kristen on the hunt. Rachel will call out to her mom and leave Kristen feeling like her daughter needs her somehow.

Next, Sarah Horton (Linsey Godfrey) will hear about Mackenzie “Mickey” Horton’s donor match. It’ll be a big DOOL surprise – even for the match herself! A major advantage will land in Gabi’s lap, so it sounds like she’ll be the one who could save Mickey’s life.

During the week of February 24-28, Gabi will use her newfound power to secure her freedom. It seems Gabi will agree to save Mickey, but she’ll want off the hook for her crimes as a trade. However, Days of Our Lives spoilers say Gabi will still pay the price. Chad DiMera (Billy Flynn) will fill Gabi in on her firing from DiMera Enterprises.

Later, an angry Stefano will have a reason to attack! He’ll go after Gabi and leave her scrambling to defend herself. As for Lani and Eli Grant (Lamon Archey), they’ll manage to put their issues behind them.

Despite some initial confusion and anger from Eli, he’ll forgive Lani for not telling him about Gabi’s crazy plot. The love between Eli and Lani will remain strong, so they’ll share a heartfelt reunion.

Other Days of Our Lives spoilers say Justin will be taken aback by “Steve’s” arrival. “Steve” will eventually admit he’s Stefano and will push for an exchange: Kayla for Marlena Evans (Deidre Hall).

While this hostage drama goes down, Rafe will corner Evan Frears (Brock Kelly). It seems likely Rafe will find out about that background check red flag that Evan wanted to cover up.

Rafe will demand some answers, but Ciara’s going to find some of her own for Ben’s sake. These Days stories should collide since Evan is most likely David Ridgeway’s (Caleb and Kyle Ends) father and Jordan Ridgeway’s (Chrishell Hartley) killer.

Ben’s execution day will leave Ciara in a panic, but she’ll be on the verge of blowing the lid off Evan’s secrets.

Days of Our Lives fans can expect some fantastic scenes, so stick with the NBC soap. As always, don’t forget to check CDL often for DOOL updates and news on all the most popular topics.