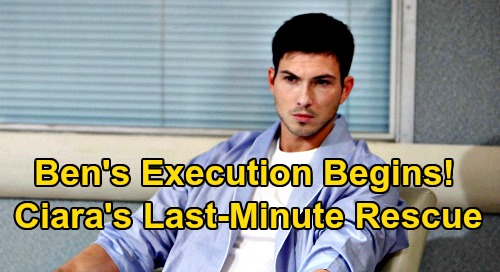 Days of Our Lives (DOOL) spoilers tease that Ben Weston (Robert Scott Wilson) and Ciara Brady (Victoria Konefal) will run into more problems. They’ve been hiding out at the DiMera gatehouse, where Chad DiMera (Billy Flynn) recently caught them. That almost ended in disaster, but Ben was able to keep his freedom thanks to Ciara’s desperate plea.

Ciara will make another one of those as Rafe Hernandez (Galen Gering) arrests Ben during the week of February 17-21. When Rafe refuses to listen, Ciara will have no choice but to stop him by force. She’ll whack Rafe in the head and try to make a quick getaway with Ben, but they won’t get very far. Rafe’s backup might arrive soon after and take Ben into custody.

Regardless, Days of Our Lives spoilers say Ben and Ciara will indeed be separated again during the week of February 24-28. Ben will be thrown back in the slammer, so Ciara will be a total mess. She’ll probably fear all hope is truly lost this time. Ciara will reel as she processes the thought of Ben actually being put to death, especially for a crime he didn’t commit.

As for Ben, he’ll accept his fate and do his best to prepare for it. Days spoilers and updates say Clyde Weston (James Read) will be upset about Ben’s capture. He may chew his son out a bit, but he’ll manage to share a tender moment with him, too. DOOL fans can expect a sweet goodbye between this father and son – as sweet as Clyde’s capable of being anyway.

At that point, it’ll be Ben’s execution day. Ben may not be able to or even want to say farewell to Ciara. That might be too painful for the both of them. Whatever the case, Days of Our Lives spoilers say Ben’s execution will officially begin. The countdown will be on to Ben’s lethal injection; he’ll be mere seconds away from the needle that’ll take him out of this world.

Of course, Days of Our Lives spoilers confirm that Wilson’s still filming. Ben isn’t going to die, so a last-minute DOOL rescue is coming up. Ciara will finally find the evidence she needs to clear Ben, so maybe she’ll burst in with it and demand that the execution be stopped. Her news is sure to bring some exciting scenes!

“Cin” fans won’t want to miss all this chaos and the heartwarming aftermath. As more Days news and updates roll in, CDL’s the place to be for all the hottest posts.