Days of Our Lives Spoilers: Stefan DiMera’s Return – Reunited With Stefano Before Steve Comes Back?

BY hellodrdavis on February 15, 2020 | Comments: one comment
Related : Days of Our Lives, Soap Opera, Spoiler, Television 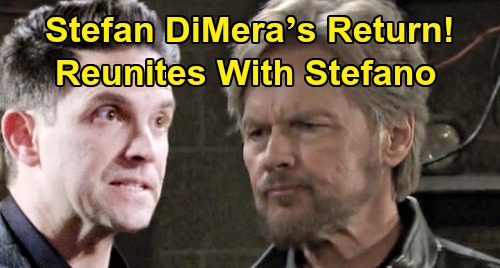 Days of Our Lives (DOOL) spoilers tease that Stefano DiMera aka Steve Johnson (Stephen Nichols) is going to be in a bind soon. As DOOL viewers know, Stefano is currently hiding out in a warehouse with Kayla Brady (Mary Beth Evans), but she doesn’t know that he’s Stefano…yet.

Soon, though, Stefano will reveal himself to Kayla, and from there it looks like he’ll hold her captive with the goal of exchanging her for Marlena Evans (Deidre Hall) down the road.

It looks like it’s going to be a real mess for everyone involved who’s trying to get Kayla back and out of the clutches of Stefano. Justin Kiriakis (Wally Kurth) will be beside himself with worry for Kayla, as will Marlena, Roman Brady (Josh Taylor), and John Black (Drake Hogestyn).

They’ll want to get Kayla back safely and apprehend Stefano. But once that happens, there will be a big dilemma.

They’ll probably need Wilhelm Rolf (William Utay) in order to turn Stefano back into Steve, but who knows whether Rolf will be willing to do that. Plus, Stefano’s kids will probably put up some objections to bringing Steve back, because if Steve comes back, then Stefano necessarily goes away.

Kristen DiMera (Stacy Haikuk) and Chad DiMera (Billy Flynn) will probably have strong opinions about the whole thing, and they might lobby hard for Stefano to remain Stefano. There could be a fight over what to do about whether Steve should be brought back or not, and it could drag out for several weeks or even months.

And speaking of Stefano’s children, what about Stefan DiMera (Brandon Barash)? Days of Our Lives spoilers say Brandon Barash is returning to canvas as early as April, and one wonders whether that means that Stefan will finally get to meet the Stevano version of his father.

That would certainly be a major DOOL event, since the two have never seen each other or spoken, and at the time that Stefan “died,” he was apparently under the belief that Stefano was dead.

A Stefan/Stefano reunion on screen would be a pretty amazing thing to see, but of course this all depends upon whether Stefano is still in Steve’s body at the time when Stefan returns to canvas. Certainly, DOOL fans would like to see the two come face to face for the first time, and one wonders whether they’d even get along or what their relationship would be like.

It will be interesting to see how this story plays out, and who knows – perhaps Stefano will be in on what’s happened to Stefan since his shooting. After all, if Rolf was involved with bringing Stefan back, then it would seem that Stefano would know all about it, too, since Rolf works for Stefano.

Are you looking forward to seeing Stefan back, and for him to come face-to-face with his father? Keep watching DOOL and be sure to read CDL for all of the latest Days of Our Lives spoilers, updates, and news.