Days of Our Lives Spoilers: Stefan DiMera’s 2020 Return Revealed – Where’s He Been & Who Knows He’s Alive? 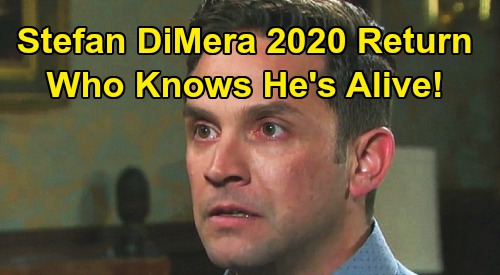 Days of Our Lives (DOOL) spoilers tease that 2020 will bring an exciting return. Stefan DiMera (Brandon Barash) has been dead and gone for a considerable amount of time – long enough for his widow Gabi DiMera (Camila Banus) to have moved on with Eli Grant (Lamon Archey). Of course, DOOL viewers know that part of Gabi’s attraction to Eli is her revenge plot against Lani Price (Sal Stowers), but still it had to be hard for her to move on from Stefan – after all, the two were deeply in love.

Well, “Stabi” fans were excited when Brandon Barash, who portrayed Stefan, showed up in an Instagram post back in November hanging out with Galen Gering, who portrays Rafe Hernandez, and some other DOOL actors at the NBC studios. That post was deleted shortly afterwards, but since then, fans have been anticipating Brandon’s return to the show, which given the show’s advanced filming schedule, should be around April 2020.

But assuming Stefan is returning to the show as anticipated, then where’s he been all this time? Factoring in the time jump, he’ll have been gone for well over a year. Of course, Days viewers know that if Stefan were somehow saved by Dr. Wilhelm Rolf (William Utay), then there would need to be a pretty elaborate story for how he pulled that off, given that Stefan’s heart was supposedly donated to Julie Williams (Susan Seaforth Hayes).

But Days of Our Lives can certainly handle a reverse explanation for all of that. For example, perhaps Rolf arranged for Julie to receive someone else’s heart on the sly and he shuttled Stefan off to a secret DiMera facility for a lengthy recovery. And if that’s the case, then surely Stefano DiMera aka Steve Johnson (Stephen Nichols) is privy to the situation. It’s hard to imagine Stefano not knowing about what Rolf is up to.

But who else might know about Stefan’s existence and return? Well, it happens to be that there’s another character who will be arriving in Salem around April 2020, and that’s Li Shin (Remington Hoffman), the son of DiMera board member Mr. Shin (Michael Hagiwara), who is often mentioned and appeared on the show earlier this year.

If you watched the DOOL digital series “Chad & Abby In Paris,” then you’ll remember Li from his appearance there. Could he be privy to Stefan’s ongoing recovery, perhaps out of the country? Stefan and Li are contemporaries, and Li seems pretty connected in the DiMera world, so he could be overseeing Stefan’s recovery and recuperation in Paris. It’s just a theory, but it would be pretty awesome to see some camaraderie between Stefan and Li.

After all, Stefan needs a good friend and ally, and it could really help him when he comes back to Salem and inevitably wants to reclaim his position at DiMera. Who knows what the face of DiMera will look like at that point – Kristen DiMera (Stacy Haiduk) could be involved in the company then, and Stefan could have some stiff competition.

At any rate, it will be exciting to see what happens as April rolls around and Li and Stefan come back on canvas. What do you think the future will hold for Stefan? Stay tuned to DOOL and don’t forget to check CDL often for the latest Days of Our Lives spoilers, updates, and news.