Days of Our Lives Spoilers: JJ’s Days Numbered – How Will He Exit? 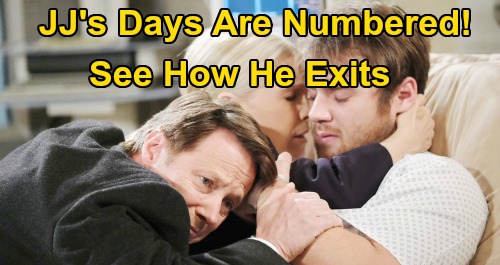 Days of Our Lives (DOOL) spoilers tease that JJ Deveraux (Casey Moss) has really been having a hard time lately and his exit is approaching. As DOOL viewers know, he’s been seriously distraught about the death of his girlfriend Haley Chen (Thia Megia), to the point where he’s become addicted to pills. The good news is that he recently got help for his addiction, and it seems that he’s started the long road to recovery.

Of course, this came after he stowed away on the DiMera jet and went to Rome, where he confronted and nearly killed Kristen DiMera (Stacy Haiduk) for her role in Haley’s death.

It seems that Kristen went berserk after Haley told her that her newborn baby had died, and that she was somehow responsible for Haley’s death. Days viewers aren’t privy to all the details of that situation yet, but suffice it to say that Haley’s death devastated JJ.

Well, now that JJ is getting help for his addiction, hopefully he’ll get himself out of the deep depression he’s in over Haley’s death. It will certainly be a long road, and he’ll probably need plenty of professional help, but he’ll have lots of support from his family and friends.

As DOOL viewers know, Jack Deveraux (Matthew Ashford) and Jennifer Deveraux (Melissa Reeves) offered their full support to their son after he confessed his addiction to them.

But will he go through his recovery process in Salem? Days of Our Lives spoilers say that JJ will soon be departing Salem, so it’s possible that he’ll leave town, perhaps headed to a longer-term rehab/recovery program. Or perhaps he’ll go through recovery in Salem with the help of his friend Eric Brady (Greg Vaughan).

DOOL spoilers indicate that Julie Williams (Susan Seaforth Hayes) will tend to JJ as well as he recovers, so he might be sticking around for at least the short-term.

But since JJ will likely “see” Haley everywhere he goes in Salem, he may want to get away from the Salem scene for a while. Of course, that could be a risky move, since he’d be leaving his primary support system – his friends and family – behind. That could make recovery difficult, so he might get through the most difficult early stages of recovery in Salem, and then choose to leave afterwards, to get away from the memories of Haley.

We’ll see what happens with JJ, but we’re certainly rooting for him to get his life together and move on in a post-Haley world. As CDL reported, he’ll soon get involved in Lani Price’s (Sal Stowers) quest to bring down Gabi DiMera (Camila Banus), so that will give him something to focus on other than Haley for a while, which will be good for him.

Are you sorry that JJ will exit Days? Stay tuned to DOOL and don’t forget to check CDL often for the latest Days of Our Lives spoilers, updates, and news.