Days of Our Lives Spoilers Next 2 Weeks: Gabi Rips Into Lani – Nicole and Brady’s Love Charade – Stefan Plots With Kristen 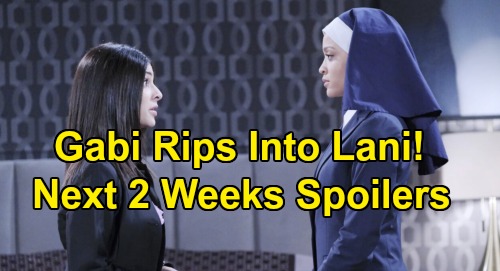 Days of Our Lives (DOOL) spoilers for the next two weeks tease that some shocking drama’s ahead in Salem. During the week of December 30-January 6, Princess Gina Von Amberg aka Hope Brady (Kristian Alfonso) will have to put out a few fires. As Rafe Hernandez (Galen Gering) inches closer to the truth, Princess Gina will finally decide to nip this in the bud. She’ll fire Rafe, but the move won’t work out as well as she hoped.

Once Hope once again does something very out of character, Rafe will realize his hunch must be correct. He can tell Hope just isn’t acting like herself, but he has no clue why. Days of Our Lives spoilers say Rafe will be out of a job, but it’ll only make him more determined to investigate and get the real story.

As for Stefano DiMera aka Steve Johnson (Stephen Nichols), he’ll be going a little stir-crazy. Stefano will want to get back out in the world, so Princess Gina will have an idea. She’ll encourage Stefano to put on an eye patch and play the part of “Steve” around town. Stefano will decide he’s willing to go for that, so “Steve” will make quite a splash at the New Year’s Eve celebration.

Other Days spoilers say Eli Grant (Lamon Archey) will think he knows who vandalized the Gabi Chic store. Some security footage might help him point the finger at Lani. Gabi Hernandez (Camila Banus) will rip into Lani eventually, so Eli will have to handle the conflict that’s brewing.

As for Kristen DiMera (Stacy Haiduk), she’ll barely get calmed down over that kiss she witnessed before she witnesses another. Brady Black (Eric Martsolf) will be locking lips with Nicole Walker (Arianne Zucker) on New Year’s Eve when Kristen appears. She’ll complain, but Brady won’t get why she cares. Brady will insist that Kristen is married to God, but she’ll declare that they broke up! She’ll shed her nun’s habit to reveal a vibrant red dress underneath.

Nicole will advise Brady not to listen to Kristen and her plea to reunite. She’ll think Brady should put Kristen behind him, so a livid Kristen will launch at attack. Days spoilers say Kristen and Nicole will have the ultimate catfight, but Brady should send them to their corners soon.

During the week of January 6-10, Sonny Kiriakis (Freddie Smith) will let himself grow closer to Evan Frears (Brock Kelly). They’ll end up sharing a kiss, so Sonny will be doing his best to let go of Will Horton (Chandler Massey). Over with Victor Kiriakis (John Aniston), he’ll suffer a health crisis after a showdown with Ciara Brady (Victoria Konefal). That’ll leave Xander Kiriakis (Paul Telfer) to play the blame game.

Back with Nicole, she’ll tell a lie and hope it helps Brady. Nicole will mislead Kristen about their relationship status – and Brady will go along with the charade. Elsewhere, Kristen will get brought up to speed on Stefano’s plot. Her loyalty will be tested as Stefano tries to figure out if he can trust her.

Next, Lani will open up to JJ Deveraux (Casey Moss) about the issues she’s facing. It looks like Lani will come clean about the pacemaker and how Gabi’s using it as blackmail material. Meanwhile, Ben Weston’s (Robert Scott Wilson) final appeal will draw near. Ciara will do everything she can for her beau, but Justin Kiriakis (Wally Kurth) will hope to do more. He’ll push Victor to do the right thing and fess up about the innocent man he put behind bars.