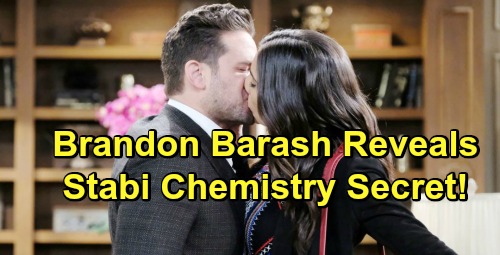 Days of Our Lives (DOOL) spoilers tease that Gabi Hernandez (Camila Banus) will continue to mull over that hot lip lock with Stefan DiMera (Brandon Barash). She claimed she wanted to give him a taste of what he’d never have, but there was obviously more to it than that! Gabi was visibly rattled as she left the mansion. There’s a thin line between love and hate, so things could start to get blurry.

Stefan is also dealing with some complicated feelings here. Gabi and Stefan obviously aren’t in love with each other yet, but there seems to be intense attraction under the surface. In a new Soap Opera Digest interview, Brandon Barash explained Stefan and Gabi’s tricky connection. Days of Our Lives spoilers say there’s something besides hatred in their hearts.

“They loathe each other so much that there is a deep-seated affection for one another, be it lust, be it something bigger than that,” Barash said. Of course, mutual admiration might be involved. Stefan and Gabi are both schemers, so they may be impressed with each other on some level. They may never even admit that to themselves, but it’s clear that they’re a lot alike.

The recent recast makes all of this quite interesting. Tyler Christopher had some chemistry with both Nadia Bjorlin (Chloe Lane) and Camila Banus. It was easy to imagine Stefan getting together with either one. However, Gabi and Stefan are the pairing to root for now. Barash appears to have far more chem with Banus than he does with Bjorlin.

That’s definitely not a bad thing. The idea of an ultimate villain and vixen power couple sounds exciting. It might be just what Salem needs! It’s wise to go with the flow now that Days has a new actor in the part. Barash is giving the role his own spin and has already earned many fans in the process.

Banus tipped everyone off to the Stefan and Gabi pairing a while back on social media. She posted a picture of herself wearing a wedding ring in the DiMera mansion, so Stefan may fall fast and hard. Days of Our Lives spoilers suggest Gabi’s scheme with Brady Black (Eric Martsolf) will lead to a spark they just can’t fight.

Gabi and Stefan are doomed to love each other eventually, so it’ll be fun to see their complicated journey. How long will it be until these two fall into bed together? We’ll give you updates as other Days news comes in. Stay tuned to DOOL and don’t forget to check CDL often for the latest Days of Our Lives spoilers, updates and news.