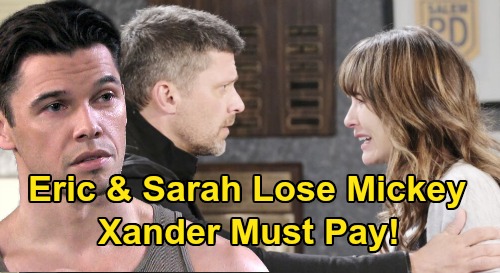 Days of Our Lives (DOOL) spoilers tease that Eric Brady’s (Greg Vaughan) emotional roller coaster will continue. He was deceived by Nicole Walker (Arianne Zucker) as well as Sarah Horton (Linsey Godfrey) and Xander Kiriakis (Paul Telfer), so he missed out on several months of Mackenzie “Mickey” Horton’s life. Days fans will recall how crushed Eric was over the betrayals.

To make matters worse, Mickey was diagnosed with cancer shortly after Eric learned about the paternity secret. It’s been tough watching Mickey go though such a tough battle, but Eric’s coping the best he can.

Eric’s forgiven Nicole and Sarah, so it’s nice that he can lean on them for support. Eric has even lightened up a bit when it comes to Xander, but that’s bound to change down the road.

No matter how the switch news ultimately gets out, this is going to be a devastating blow for both Sarah and Eric.

Let’s focus on Eric’s devastation for a moment though. Poor Eric went from suspecting Sarah was pregnant with his kid to being lied to about Xander being the father.

Eric eventually found out Mickey was his daughter, but he’s about to learn she’s not after all. The real Mickey actually died the night she was born. Eric never even got to meet her!

The sheer chaos of it all will be tough for Eric to wrap his head around. Once Eric gets updates on this baby swap, Days of Our Lives spoilers say his fury will be unleashed.

Eric will have plenty of sorrow in his heart, but he’ll also have total rage for Xander and Victor Kiriakis (John Aniston) – the Days characters who put this awful scheme in motion.

On the bright side, this should bring some gripping Days of Our Lives scenes for Vaughan. Plus, Eric will have Nicole and Holly Jonas (Harlow and Scarlett Mallory) to get him through the nightmare ahead. Their support should mean the world to Eric in his time of need.

Days of Our Lives spoilers say all the baby switch drama’s about to explode, so stay tuned. Don’t forget CDL’s the place to be if you want all the hottest DOOL updates and news!