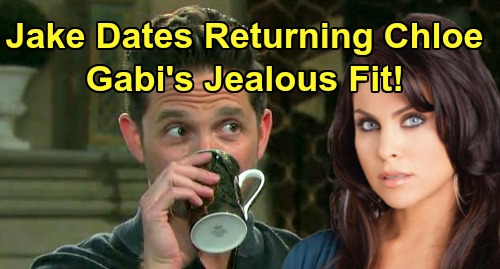 Days of Our Lives (DOOL) spoilers tease that Jake Lambert (Brandon Barash) is going to be a major man of mystery. As DOOL viewers know, Ben Weston (Robert Scott Wilson) has just encountered a man working as a garage mechanic who is the spitting image of Stefan DiMera (Brandon Barash). Ben is understandably freaked out, and during the week of April 27th, Ben will get to know Jake, and he’ll tell Ciara Brady (Victoria Konefal) later that Jake looks exactly like Stefan.

From there, things are going to get interesting. It won’t be long before Gabi DiMera (Camila Banus) lays eyes on Jake, and she’ll proceed to faint straight away. Upon awakening, Gabi will apparently be relentless as she insists that Jake is Stefan, and that he’s lying about his identity. Of course, from Gabi’s perspective, Jake and Stefan being the same person isn’t so preposterous.

Gabi’s used to a world in which Dr. Wilhelm Rolf (William Utay) brings people back from the dead at will, and in which people are microchipped to turn them into other people. Gabi might think, quite reasonably, that Stefan was brought back to life by Rolf, then got microchipped to turn him into this Jake person.

Well, it’s hard to imagine Jake being at all amused by any of this, or him taking any of it seriously. To Jake, it will all be science fiction nonsense, and he’ll probably want to get as far away from Gabi as possible; however, it doesn’t look like that’s going to happen.

DOOL spoilers say that Gabi will be quite persistent in pursuing Jake, and she’ll even plant a big smooch on him, probably in order to jog his memory for their love.

And speaking of love, who’s to say that Jake doesn’t already have a girlfriend? If Jake does have a woman in his life, that’s REALLY not going to go over well with Gabi. Gabi will surely get the jealousy bug if Jake even talks about other women, or another woman in particular.

You know, given that Chloe Lane (Nadia Bjorlin) is returning to Days of Our Lives, it would be an interesting twist if Jake became attracted to Chloe. After all, Stefan and Chloe had a brief period of dating, and they kissed a couple of times.

Stefan was seriously into Chloe before he and Gabi started getting together, so it would be fitting for Jake to eventually become interested in her.

We’d love to see a jealous Gabi where Jake is concerned, because it probably means that she’d be even more willing than usual to fight for her love. God help the woman who might be dating or end up dating Jake, because now she’ll have Gabi to deal with!

And as Jake learns more about Gabi and her history with Stefan, and then with Eli Grant (Lamon Archey), he’s probably going to want nothing to do with Gabi.

We look forward to seeing Gabi try to pursue Jake, but we suspect it will be a pretty rocky road for the two. Bring it on! Stick with Days of Our Lives and don’t forget to consult CDL for the latest DOOL spoilers and news.