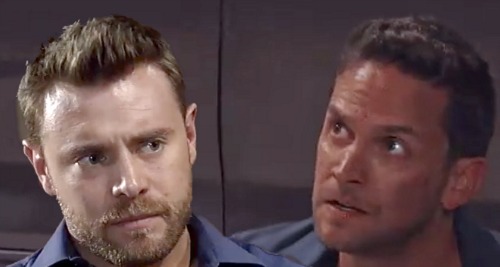 Days of Our Lives (DOOL) spoilers tease that Brandon Barash’s new character name has been revealed – and it could offer a big hint about where this storyline’s headed. DOOL viewers can expect Barash to introduce himself as Jake Lambert when he meets Ben Weston (Robert Scott Wilson). There are several reasons why this name is significant, so let’s talk about them.

Ron Carlivati is currently the head writer at Days of Our Lives, but General Hospital fans will recall also his time as the head writer over there. Carlivati was at GH from 2012-2015, but we want to discuss a crucial storyline that happened during 2014.

Almost every soap fan has probably heard the name Jason Morgan. Once Steve Burton left the role of Jason on General Hospital, Billy Miller later stepped in as a recast. Jason was disfigured after being hit by a car and underwent facial reconstructive surgery. Jason also had no memory of who he was when he awoke, so he ultimately went by Jake Doe.

Jake began building a new life before the truth came out and he was able to reclaim his life as back-from-the-dead Jason Morgan. Of course, Jason is also known for riding a motorcycle, so keep that in mind as we explain how this connects to Barash’s new role.

Based on all the available clues, it seems Ben will meet this Stefan DiMera lookalike in a motorcycle garage. That lines up with the blurry set pic that was leaked of Barash last year. Now we’ve learned that Barash’s character name is “Jake Lambert,” so there are some similarities here.

Carlivati has earned the nickname “ReRon” by some fans due to his penchant for reusing tropes and stories – both from his time on General Hospital and through repeating plots at Days.

There really have been awful lot of cabin fires, amnesiacs and brainwashing victims. Marlena Evans (Deidre Hall) also has to have a near-death experience every few months – preferably one that includes a coma!

To be fair though, the genre itself tends to do a lot of those same tropes over and over. They work, so they might as well take advantage of them. In this case, another back-from-the-dead amnesiac story is useful – and perhaps necessary if they want this guy to be Stefan in the end.

Jake Doe turned out to be Jason, so this Jake could turn out to be Stefan. Using the same name seems like a fun little nod to Carlivati’s similar work at General Hospital.

We should add that GH later rewrote things after Carlivati’s departure, but that was only due to Burton’s return to the popular role of Jason. Miller’s character became Jason’s memory-mapped twin, Andrew “Drew” Cain. Honestly, that story was a mess that’d take too long to get into, but it wasn’t Carlivati’s original intention anyway. His plan was for Jake Doe to remain Jason.

Is that the plan on Days, too? Will Jake actually be Stefan? Days of Our Lives spoilers don’t confirm that just yet, but it’s logical based on the hints they’re offering up so far. As other Days news comes in, we’ll be sure to give you updates.

It sounds like Brandon Barash’s DOOL return as Jake will mirror Billy Miller’s GH debut as Jake Doe! Stick with CDL for scorching Days of Our Lives spoilers, updates and news.