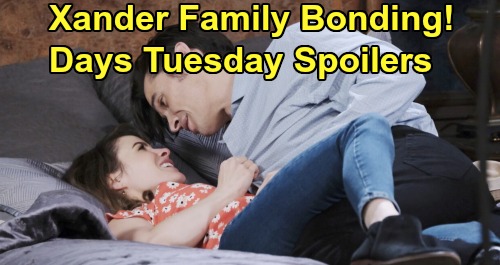 Days of Our Lives (DOOL) spoilers for Tuesday, January 4, tease that Xander Kiriakis (Paul Telfer) will be thrilled over Sarah Horton’s (Linsey Godfrey) latest confession. She just cleared up the misunderstanding about sleeping with Eric Brady (Greg Vaughan) and assured Xander that he’s the one she wants. Sarah professed her love, so Xander will be on cloud nine in Tuesday’s episode.

Of course, Xander will be even happier after Sarah reveals Eric’s decision. She’ll tell Xander that Eric’s willing to let him be part of Mackenzie “Mickey” Horton’s life. Days of Our Lives spoilers say Xander, Sarah and Mickey will all enjoy some family bonding time. They’ll come together for some sweet moments before Xander and Sarah heat things up.

DOOL fans can expect Sarah and Xander to make love, so that should be a real treat for “Xarah” fans! It’s nice that these two are getting some bliss before it all falls apart – and it’s sure to after Xander’s role in the baby swap is revealed. That’ll be quite a blow down the road, but Sarah and Xander can savor the happiness for now.

On Tuesday, Brady will grow even closer to Kristen. He’ll explain the relationship ruse meant to drive her away, but he’ll also admit he still has feelings for her. Brady will think they deserve another chance, and Kristen will certainly agree. Days of Our Lives spoilers say they’ll kiss and make up, so this will be a great first step in their new chapter.

Speaking of kissing and making up, Nicole and Eric Brady (Greg Vaughan) will be doing that across town. Eric will offer Nicole his forgiveness before announcing that he’s moving home. They’ll share a passionate kiss as they reconnect and prepare to reunite their family with Holly Jonas (Harlow and Scarlett Mallory).

Finally, Ciara Brady (Victoria Konefal) will be feeling down in the dumps. She’ll think she’s a failure for being unable to save Ben Weston (Robert Scott Wilson) from the death penalty. Ciara will hate that she’s let Ben down, but she shouldn’t give up hope! Days spoilers state that Ciara’s luck will turn around with a shocking lead later this week.

It sounds like some fantastic scenes are coming up. We’ll give you updates as Days news emerges. Stay tuned to the NBC soap and don’t forget to check CDL often for the latest Days of Our Lives spoilers, updates and news.