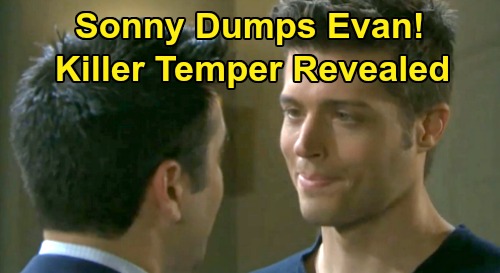 Days of Our Lives (DOOL) spoilers tease that Sonny Kiriakis (Freddy Smith) may soon have a serious situation on his hands. He recently embarked on a new relationship and slept with Evan Frears (Brock Kelly) after signing divorce papers with Will Horton (Chandler Massey).

Sonny truly believed that there was no way he was ever getting back together with Will, since Will was responsible for his mother Adrienne Kiriakis’ (Judi Evans) death.

Well, as DOOL viewers know, it’s just come to Ciara Brady’s (Victoria Konefal) attention that Will wasn’t actually responsible for the accident that caused Adrienne’s death. She’s shared this will Will, but so far Sonny has no idea about Will’s innocence.

But soon that will change, and that can only mean one thing…that Sonny and Will are going to want to be together again.

But where will that leave Evan? Unfortunately for him, it will probably leave him getting dumped by Sonny in pretty short order. And there’s reason to believe that he might not take it very well.

It’s been hinted pretty strongly on the show that Evan may be David Ridgeway’s (Jaxton and Dexter Ellis) biological father, having had a prior relationship with Jordan Ridgeway (Chrishell Stause). And it that’s the case, then it could signal some serious problems ahead.

After all, if Evan is Jordan’s ex and David’s father, then there’s a good chance that he’s the person who killed Jordan last year. Ben Weston (Robert Scott Wilson) was convicted of her murder and now sits on death row, but DOOL viewers know that Ben didn’t do it.

Evan seems like the most likely culprit at this point, and it’s likely that he murdered Jordan because she rejected him and tried to keep him from David.

And if Evan is that unstable and dangerous, then he might not take it well when Sonny eventually tries to break things off with him. Evan seems like he has an even-keel personality, but he just might have a hidden psycho side, and that could be totally unleashed under periods of stress and rejection.

Now, there’s just no way that Sonny is going to stick in a relationship with Evan once he finds out that Will is innocent in his mother’s death. Plus, DOOL spoilers say that once Sonny learns that Will is innocent, he’s going to be overjoyed and will probably want to tear up those divorce papers and reclaim his marriage to Will.

And that means an inevitable breakup with Evan. We’ll see what happens from here, but if indeed Evan is unstable and can’t handle rejection well, then a breakup with Sonny could reveal his dark side.

We could see a psycho side of Evan sooner rather than later. Will could even find himself in danger if Even feels too threatened by Will’s release and reunion with Sonny.

Do you think that Evan will snap and reveal a deadly side when Sonny tries to end their burgeoning relationship? Stay tuned to DOOL and don’t forget to check CDL often for the latest Days of Our Lives spoilers, updates, and news.