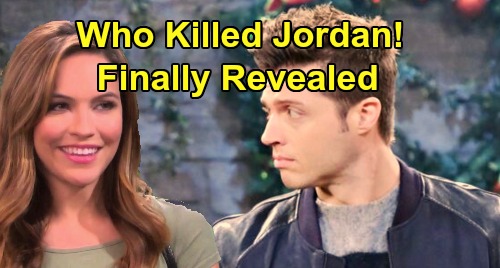 Of course, that still leaves questions about who set Ben up as well as who really killed Jordan Ridgeway (Chrishell Stause). Jordan’s murderer could easily be the same person who pinned the crime on Ben. After all, Ben had quite the reputation as the necktie killer. It certainly wasn’t hard to pin this on Ben thanks to his murderous track record.

However, we know Ben is innocent, which means the real culprit is still out there somewhere. In fact, this culprit could be living right there in Salem. Let’s consider someone who suspiciously appeared shortly after Jordan’s murder.

According to Rafe Hernandez (Galen Gering), Evan Frears (Brock Kelly) was a godsend over the year DOOL fans missed due to the time jump. Evan may not have been there for all of it, but he’s at least been in town for a good chunk. It’s possible Evan killed Jordan and then stuck around to become David Ridgeway’s (Caleb and Kyler Ends) nanny.

Naturally, that means we have to consider Evan’s potential motive. Days viewers still don’t know who the father of Jordan’s baby is, so Evan might be a solid candidate. He alluded to a toxic relationship on the west coast – and Jordan was living in California before she came back to Salem.

Just because Evan’s interested in Sonny Kiriakis (Freddie Smith) now doesn’t mean he wasn’t with a woman before.

What if Evan confronted Jordan about his son and the faceoff went horribly wrong? This may or may not have been flat-out murder. Jordan seemed terrified of her “baby daddy,” but she also tried to poison Ciara with a cupcake. She’s not exactly someone we could rely on to give us an accurate perspective.

Evan may not be a monster since we’ve seen what appeared to be moments of genuine compassion with Sonny. With that in mind, self-defense is an option here. Jordan was strangled, but that was a crucial plot point to put Ben behind bars.

Days could still deliver a story where Evan was backed into a corner and did what he felt he had to do in that moment to stop Jordan.

Then again, Evan could just be putting on an act. After all, if Evan did kill Jordan for any reason, he still let Ben take the fall for it. We can’t rule out the idea that Evan’s after Sonny’s money or has some tricks up his sleeve. Not enough is known about Evan’s character to get the full picture of who he is.

During the week of January 6-10, Days of Our Lives spoilers say Evan will get sneaky and look through some of Rafe’s paperwork. That could be the first sign of trouble with this guy. There’s more than meets the eye when it comes to Evan, who isn’t meant to be a long-term character in Salem.