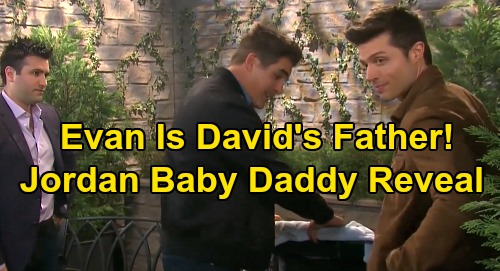 Days of Our Lives (DOOL) spoilers tease that there’s an important question on the minds of many viewers. In fact, this one was raised long before DOOL’s time jump and still hasn’t been answered. Who Is David Ridgeway’s (Caleb and Kyler Ends) father? It’s a mystery that’ll slowly unravel, but Days might’ve already given a few clues.

Jordan Ridgeway (Chrishell Stause) was always been adamant that her son’s father shouldn’t be in his life. Of course, Jordan was out of her mind and homicidal, so take anything she said with a grain of salt! There are two sides to every story – and we can imagine Jordan got crazy ideas in her head when it came to her ex. He may not have been a bad guy or at least not entirely bad.

We should also remember that Jordan was living out in California before she first returned to Salem. Now let’s consider the “manny” that randomly moved from the west coast to Salem. It’s an odd spot to pick if you don’t have family in town – and Evan Frears (Brock Kelly) claims he doesn’t.

Evan also mentioned that his last relationship was toxic, so that could certainly fit with Jordan. Plus, Evan is practically playing papa to David as it is. Perhaps this whole nanny ruse is just a way to be close to his child! Could David actually be Evan’s son?

Before Evan came on the scene, Days of Our Lives buzz predicted he would be a bisexual character. Evan may be into both the fellas and the ladies. It opens the door for Evan to have had a baby with Jordan before he showed up. Naturally, this also raises suspicions about why Evan hasn’t claimed David as his own.

It’s possible Evan doesn’t know and this is all one big soapy coincidence, but it makes more sense to give him a secret. Evan needs something to spice up his character and make him interesting. However, we should note that Days spoilers don’t point to Evan sticking around for good. It seems Evan is a temporary character, so maybe there was some truth to Jordan’s claims about him being a baddie.

Rafe Hernandez (Galen Gering) trusts Evan, but should he? Could Evan have murdered Jordan or killed her in self-defense? It’s worth mentioning that DOOL spoilers say Evan will go rummaging through Rafe’s papers soon, so he could be headed down a shady path.