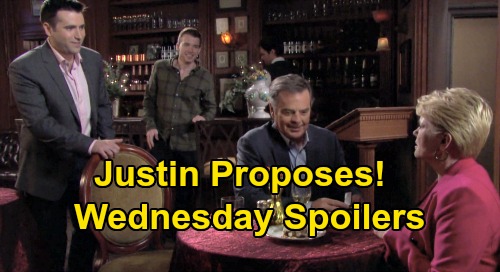 Days of Our Lives (DOOL) spoilers for Wednesday, October 23, tease that Justin Kiriakis (Wally Kurth) will have a surprise in store for Adrienne Kiriakis (Judi Evans). He’ll plan a romantic evening for his love, but he’ll hit a slight snag thanks to Sonny Kiriakis (Freddie Smith) and Will Horton (Chandler Massey). They’ll waltz over just as Justin pulls out a ring to pop the question, so Justin will not-so-subtly push them to get lost!

Fortunately, this proposal will get back on track soon. Days of Our Lives spoilers say Justin will ask Adrienne to remarry him, and it looks like she’ll gladly accept. This couple should be on cloud nine, but a dark cloud will roll in after the time jump. DOOL fans should definitely be prepared for some heartbreaking drama.

In the meantime, Will and Sonny will struggle to cheer up Gabi DiMera (Camila Banus). They’ll worry she isn’t holding up very well after such a tough loss. Gabi was devastated by Stefan DiMera’s (Brandon Barash) death, but there’s one thing that’s keeping her going right now. She intends to make Stefan’s killer pay, so trouble’s headed straight for Lani Price (Sal Stowers).

Gabi will drop a bomb later this week, but Lani and Eli will be busy with last-minute wedding prep until then. They’ll taste some cakes and talk about how wonderful it’ll be after they tie the knot. Eli and Lani expect to have a bright future together, but Days spoilers say Gabi’s sneaky plan will derail their happily ever after.

Over with Victor Kiriakis (John Aniston), he’ll make a move he could end up regretting. Days of Our Lives spoilers state that Victor will get on Kate Roberts’ (Lauren Koslow) bad side – and that’s never a good place to be! It seems likely that Victor will rescind or at least amend his Titan offer.

Kate doesn’t like to be jerked around, especially since there’s enough of that going on at DiMera Enterprises! She’ll probably rip into Victor and vow to give him some serious competition, so don’t miss all Wednesday’s excitement. We’ll give you updates as other Days news comes in. Stay tuned to DOOL and don’t forget to check CDL often for the latest Days of Our Lives spoilers, updates and news.