Days of Our Lives Spoilers: Gabi Threatens To Shut Down Julie’s Pacemaker – Forces Lani To Dump Eli At Altar

BY hellodrdavis on October 21, 2019 | Comments: one comment
Related : Days of Our Lives, Soap Opera, Spoiler, Television 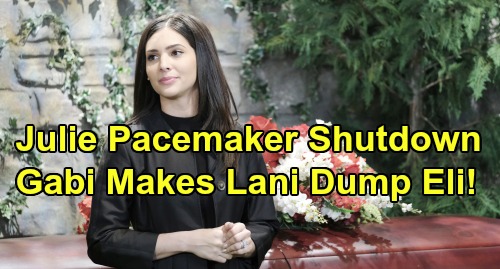 Days of Our Lives (DOOL) spoilers tease that Gabi DiMera (Camila Banus) might be soon taking a page out of her late husband’s playbook. DOOL viewers will remember that last year, Stefan DiMera (then played by Tyler Christopher) gained control of Steve Johnson’s (Stephen Nichols) bionic eye and threatened to shut down Steve’s sight if Kayla Johnson (Mary Beth Evans) didn’t do his bidding. It was a terrible blackmail situation that caused a lot of problems for Steve and Kayla.

Stefan was able to potentially turn off Steve’s sight because DiMera Enterprises owned a company called Visionary Bionics that manufactured the bionic eye. Well, given some recent clues on DOOL, it appears that Visionary Bionics is still owned by DiMera Enterprises and that it manufactures the state-of-the-art pacemaker that Julie Williams (Susan Seaforth Hayes) is about to receive. Kayla recently mentioned that she was going to try to get the pacemaker from the manufacturer quickly.

And that perked up Gabi’s ears right away. It looks like Gabi will do a little digging and realize that the pacemaker the Julie’s about to receive will come directly from Visionary Bionics…and this can only lead to trouble, given that Gabi is desperately looking for leverage over Lani Price (Sal Stowers). Gabi blames Lani for Stefan’s death, and she’s out for revenge.

Well, it seems that Gabi could get her opportunity to make Lani’s life miserable, and she might do it through Julie’s pacemaker. If Gabi can somehow gain control of Julie’s pacemaker and be able to turn it off at the blink of an eye, then she might hold that over Lani’s head. For example, Gabi could tell Lani that she must do exactly as Gabi wants, or else she’ll mess with the pacemaker and kill Julie!

According to DOOL spoilers, Gabi will soon approach Lani with a big demand. She’ll want Lani to dump Eli at the altar and ruin their big wedding day, as punishment for what Lani did to Stefan. But Lani could just refuse, right? Well, under normal circumstances, that would be the case, but what if the circumstances weren’t exactly normal? What if Gabi threatened to turn off the pacemaker if Lani didn’t comply?

It certainly sounds like that’s where this storyline is headed, since other DOOL spoilers indicate that Lani will actually try to negotiate with Gabi and outmaneuver her. There would be no reason for Lani to squirm and try to outmaneuver Gabi unless Gabi was holding something over Lani’s head. And given that the pacemaker has suddenly become a big concern on the show and a way to keep Julie from having another heart attack, we suspect that Gabi will use it to her full advantage.

At any rate, we could very well end up seeing Lani dump Eli at the altar, all in an attempt to save Julie from more health problems at the hand of Gabi. Do you think Gabi will threaten to mess with Julie’s pacemaker to get Lani to ruin her own wedding? Stay tuned to DOOL and don’t forget to check CDL often for the latest Days of Our Lives spoilers, updates, and news.