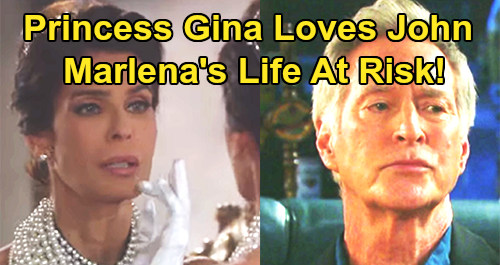 Days spoilers say there’ll be some clues for Hope’s loved ones to find. Ciara Brady (Victoria Konefal) will discover Stefano DiMera’s (Joseph Mascolo) portrait has gone missing. She’ll undoubtedly wonder who took it, but her own mother may not immediately come to mind. Ciara will probably grill Ben Weston (Robert Scott Wilson) to see if he spotted anyone on the grounds.

Hope Brady Will Fight Princess Gina As Hard As She Can

However, Hope should have that portrait stashed away for safekeeping. She’ll be a mess as Princess Gina struggles to burst through. Hope will fight as hard as she can, but it won’t be long until Dr. Rolf pushes her over the edge.

After he presents Hope with a tiara, she’ll head into full-blown Princess Gina territory. Hope will be totally gone at that point, leaving Princess Gina to wreak havoc.

Hope doesn’t normally smoke, so they’ll wonder when she picked up the habit. Marlena and John will sense that there’s more to the story here, but they’ll have trouble cracking the crazy case.

Of course, the biggest shocker should be Hope’s sudden interest in John. Princess Gina had a romance with John once upon a time, so she’ll make her move soon enough. Passion will drive Princess Gina down a dangerous path, so Days of Our Lives spoilers say some twists and turns are brewing. Marlena had better watch her back!

It sounds like some bombshells are coming up in Salem. We’ll give you updates as other Days news emerges. Stay tuned to DOOL and don’t forget to check CDL often for the latest Days of Our Lives spoilers, updates and news.