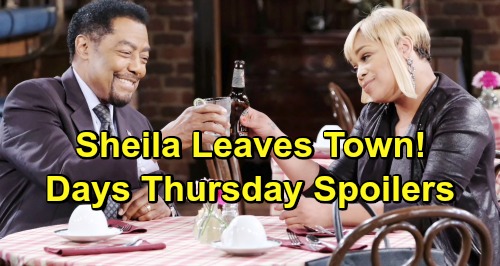 Days of Our Lives (DOOL) spoilers for Thursday, May 2, tease that Tripp Dalton (Lucas Adams) will find what’s left of his wedding photo. Claire Brady (Olivia Rose Keegan) did some serious damage to that thing, so Tripp will confront her about it. He may sense that Claire is spiraling out of control, but he has no idea how far she’s already gone.

Claire’s problems started out simple enough. She was possessive, controlling and often jealous of Ciara Brady (Victoria Konefal). Unfortunately, that somehow escalated to attempted murder and Claire’s been a mess ever sense. Between trying to keep her role in the cabin fire a secret and dealing with this sham marriage, Claire’s practically on the verge of a breakdown.

Days of Our Lives spoilers say Claire will prove that with her intense outburst on Thursday. She’ll blast Tripp for marrying Haley Chen (Thia Megia) and ruining everything, but it’s clear that she’s not getting her way. Claire can either learn to live with it or she can do something drastic and dangerous to tear this fake couple apart. Based on Claire’s mental state lately, it’ll probably be the latter!

While Claire rips into Tripp, Eli Grant (Lamon Archey) will lash out at Lani Price (Sal Stowers). He already felt like she was spending too much time with David, so he’ll voice outrage over her leave of absence announcement. Days spoilers say Eli will remind Lani that this isn’t her baby. He may warn her that caring for this kid isn’t going to bring their dead son back.

Lani will stand her ground on being there for Jordan Ridgeway’s (Chrishell Hartley) child, but her relationship could crumble if she’s not careful. Eli and Lani are definitely facing some serious issues right now. Over at the debate, Abe Carver (James Reynolds) will try to do damage control. Jack Deveraux’s (Matthew Ashford) photo shocker certainly threw him for a loop.

Abe had been insisting that he had no romantic involvement with Sheila Watkins (Tionne “T-Boz” Watkins), which DOOL fans know is true. However, that picture seems awfully scandalous. Abe will have to explain himself, but it’ll probably come off as pretty flimsy. That’s why JJ Deveraux (Casey Moss) will decide to deliver a blow to Jack’s campaign as well.

Days viewers will recall that JJ once had a fling with Eve Donovan (Kassie DePaiva). Will that be what JJ mentions publicly? He might argue that Eve just works her way through Deveraux men like the user that she is. Even if it’s something more recent, JJ will be determined to cause a mess for Jack to clean up.

Later, Abe and Valerie Grant (Vanessa Williams) will have an honest conversation. Their relationship wasn’t on solid ground anyway, so it can’t survive this. They’ll break up, but that won’t be the only bad news for Abe on Thursday. Days of Our Lives spoilers say Sheila will also leave Salem. She won’t want to stick around and cause more problems or deal with the dirty looks around town.

It sounds like a fantastic episode’s coming up. We’ll give you updates as other Days details emerge. Stay tuned to DOOL and don’t forget to check CDL often for the latest Days of Our Lives spoilers, updates and news.