Days of Our Lives Spoilers: Judi Evans’ Return Confirmed by Wally Kurth – Will It Be Adrienne or Bonnie? 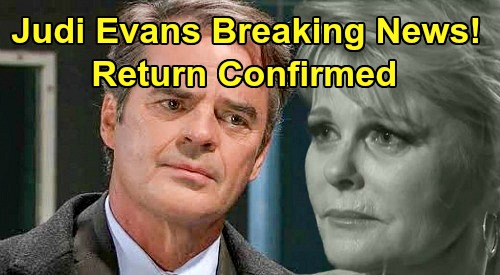 Days of Our Lives (DOOL) spoilers reveal that Wally Kurth (Justin Kiriakis) is speaking out about a beloved costar Judi Evans’ return. DOOL fans have known about Adrienne Kiriakis’ (Judi Evans) death for quite some time, but viewers recently had a chance to watch the horror unfold. It was heartbreaking to see Adrienne’s loved ones grieve for her – especially since innocent Will Horton (Chandler Massey) took the blame!

Adrienne’s exit was a tearjerker for sure, but that’s not the last we’ll see of Evans. On Twitter, Kurth confirmed the Days of Our Lives actress will return. “Rest assured @TheJudiEvans is coming back,” Kurth said. Of course, there are many ways the NBC soap could make that happen.

For starters, Evans also played Adrienne’s doppelganger, Bonnie Lockhart. Since Bonnie’s name has been mentioned several times lately, she could easily pop again and cause some trouble. We’re long overdue for some of Bonnie’s dirty tricks and wild behavior!

However, there are other options to consider here. Peter Reckell has reprised his role as Bo Brady in spirit form. Days fans lovingly referred to him as “Ghost Bo” or “Bhost,” so it’s possible Adrienne will return in a similar fashion.

If there are moments when Justin or Sonny Kiriakis (Freddie Smith) need guidance, Adrienne could come back in a vision and impart some words of wisdom.

Then again, Days could take the route of it all being in someone’s head. Jennifer Horton (Melissa Reeves) simply imagined Jack Deveraux (Matthew Ashford) during some of her personal struggles – and he later returned from the “dead.” It was smart to leave the door open by making Jack a figment of Jenn’s imagination.

There’s even a chance Kurth’s promised comeback involves the real-deal Adrienne. Days of Our Lives could always rewrite things and make it so Bonnie died in the crash instead.