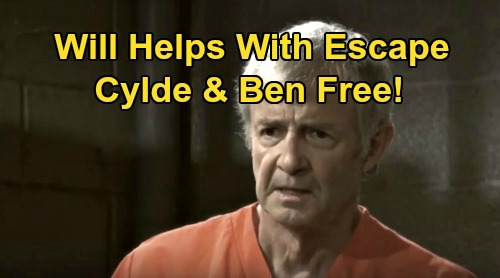 Days of Our Lives (DOOL) spoilers tease that Will Horton (Chandler Massey) will put his own freedom on the line. DOOL fans know Ciara Brady (Victoria Konefal) recently told Will the story of his innocence. She insisted Maggie Kiriakis (Suzanne Rogers) was to blame for Adrienne’s (Judi Evans) death, not Will.

After Will learned Victor Kiriakis (John Aniston) and Xander Kiriakis (Paul Telfer) set that in motion, he asked Ciara for some time to think. That means Will’s going to remain behind bars for a bit longer, which will put him in the position to help Ben Weston (Robert Scott Wilson).

Although Ben tried to kill Will once upon a time, they’ve actually become pretty good friends at Statesville. Ben even saved Will from getting stabbed by Clyde Weston (James Read), but it turns out Will’s going to help his enemy, too!

During the week of February 3-7, Days of Our Lives spoilers say Clyde and Ben will settle on an escape plan. Ben wasn’t too thrilled when Clyde suggested the idea, but he’ll come around as his execution date draws near. Since Ben didn’t murder Jordan Ridgeway (Chrishell Stause), there’s no reason for him to face a lethal injection for it.

Will certainly agrees with that, so he’ll want to do whatever he can to assist Ben – even if it means assisting Clyde as well. Clyde’s got people both inside the prison and out who can be part of this plot. He’ll be crucial if they’re going to pull it off, so Will and Ben will know they can’t leave Clyde out of this.

Of course, Ben may object to Will putting his own freedom at stake. The fact that Will’s innocent is a game-changer. Days spoilers say Will could walk free if Maggie learns the truth and goes down for Adrienne’s death. If Will helps two convicts escape and gets caught, that could still leave him stuck in a cell.

Nevertheless, Will will want to repay Ben and Ciara for everything they’ve done for him. He’ll become another vital piece of this escape scheme, so we’ll see if Ben and Clyde indeed manage to flee. From the sound of these Days of Our Lives spoilers, they just might succeed! Salem could be in lockdown soon enough.

Are you looking forward to Ben and Clyde’s escape plan? Is it too risky for Will to help or are you glad he’s coming through for them? We’ll give you updates as other Days news comes in. Stay tuned to DOOL and don’t forget to check CDL often for the latest Days of Our Lives spoilers, updates and news.