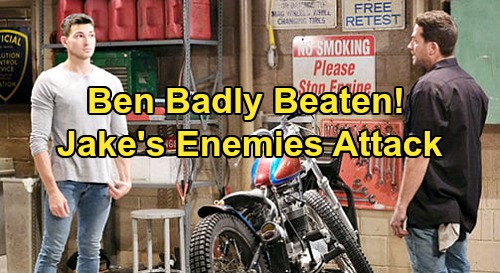 Days of Our Lives (DOOL) spoilers tease that Ben Weston (Robert Scott Wilson) will run into some unexpected trouble. DOOL fans know Jake Lambert (Brandon Barash) promised to speak with the boss and hopefully get Ben hired as a second mechanic. Jake filled the first slot, but he noted that they had more work than he could handle.

The owners were thinking about taking on another mechanic anyway, so this is going to work out great for Ben – at least first. Jake pointed out that if he was able to score Ben this position, he’d basically be Ben’s boss.

At the time, that seemed like fun dialogue to tie Jake and Stefan DiMera’s (Brandon Barash) stories together. Ben worked for Stefan and now he’ll work for Jake. However, there was apparently a deeper meaning – a clue that’ll be important as the drama heats up.

Before we get to that, let’s focus on some “Cin” bliss. Days of Our Lives spoilers say Ben will get updates from Jake and offer good news to Ciara Brady (Victoria Konefal). This certainly isn’t Ben’s dream job, but it’s better than nothing.

Ben’s past is pretty horrifying on paper, so finding jobs isn’t easy – particularly around Salem where most people still see him as “The Necktie Killer.”

Fortunately, Jake was willing to take a chance on Ben like Stefan did. Days of Our Lives spoilers say Ben and Ciara will have a little employment celebration.

They’ll feel like things are really looking up, especially since Victor Kiriakis (John Aniston) will soon be on the mend. Between Ciara’s grandpa recovering and Ben scoring this new job, they’ll have excellent reasons to rejoice.

Sadly, the situation will take a dark turn for Ben during the week of May 4-8. Days spoilers say Ben will be working at the garage when some thugs show up. Jake won’t be around, but his new connection to Ben will become a problem.

These baddies will keep talking about how Jake is Ben’s boss, so they’ll want to send Jake a message. DOOL viewers can expect Ben to be attacked and knocked out cold. Ben will get roughed up during this sudden showdown, but Ciara will quickly come to his rescue.

After Ben awakens to see Ciara sitting above him, she’ll make sure he’s all right and ultimately tend to his injuries herself. It doesn’t sound like Ben will be hurt badly, but this experience should be awfully unsettling. Ben and Ciara will definitely fear they’ve found more trouble through this new link to Jake!

This will spark a mystery about who Jake is and why he’s mixed up with such shady characters. It sounds like Days has some exciting stuff in store. CDL’s your hotspot for the best Days of Our Lives spoilers, updates and news.