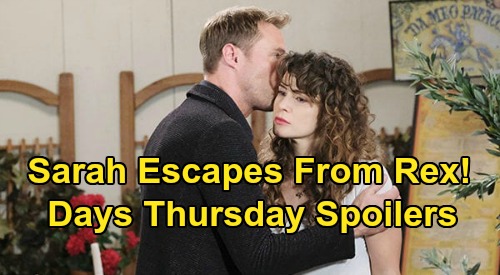 Days of Our Lives (DOOL) spoilers for Thursday, April 30, tease that Gabi DiMera (Camila Banus) will feel like her world’s been turned upside down. In the town square, Gabi just caught a glimpse of someone who looks just like Stefan DiMera (Brandon Barash). Of course, DOOL fans already met Jake Lambert (Brandon Barash), but Gabi’s thinking this must be her “dead” husband.

As Gabi tries to process what she’s seeing, she’ll struggle to breathe and feel like the ground’s swaying below her. Days of Our Lives spoilers say Gabi will ultimately faint, but Jake will bend down to check on her. Once Gabi opens her eyes, she’ll once again assume this has to be Stefan.

However, Jake will be eager to get away from this seemingly crazy lady. Back at the auto garage, Jake will likely bring Ben Weston (Robert Scott Wilson) up to speed on his strange encounter.

Jake may suggest he really must look like this Stefan guy! Ben looked like he’d seen a ghost when he first saw Jake, so he’ll certainly understand how Gabi’s feeling right about now. 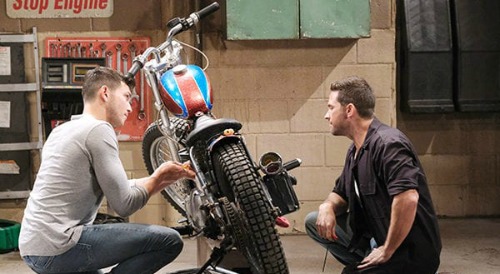 Other Days spoilers say Kristen DiMera (Stacy Haiduk) will score a visit with Brady Black (Eric Martsolf). Brady decided to take the rap for Kristen, but she won’t be sure she can let him do that.

Although Brady wants to protect Kristen and give her a chance to be a mother, Kristen will think it’s best if she comes clean to the cops. She won’t want Brady to go down for stabbing Victor Kiriakis (John Aniston).

Naturally, Brady will shut down that idea and remind Kristen of what’s at stake. Rachel DiMera Black will hopefully be found soon, so Kristen doesn’t need to be behind bars when it happens. Kristen promised to be there for their daughter, so Brady may make her stick to that promise.

At the hospital, Victor will get some support from Ciara Brady (Victoria Konefal). Days spoilers say Ciara will push her grandpa to make a full recovery. She’ll want Victor to wake up and come back to his family – and thankfully, he will. Victor’s set to wake up within the next episode or two, but that could bring major drama for Kristen and Brady.

In the meantime, Days of Our Lives spoilers say Sarah Horton (Linsey Godfrey) will run into someone surprising. Sarah will cross paths with Rex Brady (Kyle Lowder) in Paris, so that’ll bring some nerve-wracking moments as she lies about Mackenzie “Mickey” Horton.

After Sarah makes an excuse and scampers off with “Mickey,” Rex will get a crucial phone call. He’ll find out Sarah’s on the run, so that’ll certainly change Rex’s perspective!

We’ll fill you in on all the latest news and updates. DOOL viewers won’t want to miss all the action. CDL will have plenty more Days of Our Lives spoilers, updates and news to check out, so stop by often.