Days of Our Lives Spoilers: Week of April 27 Preview – Gabi Faints After Seeing Jake – Wakes Up In Stefan DiMera’s Arms 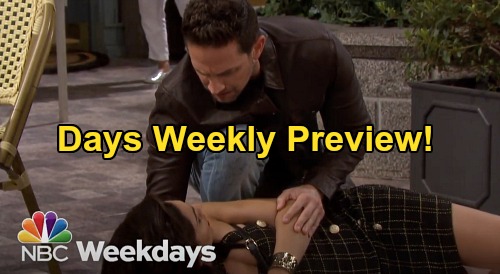 Days of Our Lives (DOOL) spoilers preview teases that we’re in for an exciting week on the NBC soap. The new DOOL promo for the week of April 27th is all about a very exciting return…that of Brandon Barash! As DOOL viewers are well-aware, Brandon played Stefan DiMera until his death in 2019, and ever since it became apparent that Brandon was returning to the show, fans have been anxiously awaiting his return.

Well, as viewers saw on the episode airing on Friday, April 24th, Ben Weston (Robert Scott Wilson) entered a mechanic’s shop to solicit some work on Ciara Brady’s (Victoria Konefal) motorbike, and the guy who slid out from under a car looked just like Stefan! Of course, the guy wasn’t dressed like Stefan and didn’t act like Stefan, but the look was clearly the same!

The new DOOL promo picks up right where that scene left off, with Ben giving the guy a very strange and surprised look, and the guy saying, “You look like you’ve seen a ghost.”

Ben’s voice is then heard saying, “He looks EXACTLY like Stefan.” And indeed the guy does! According to DOOL spoilers, the guy will introduce himself as Jake, and Ben will be absolutely stunned.

The promo then moves into the big scene that fans have been waiting for…the moment when Gabi DiMera (Camila Banus) first sees Jake. Gabi is shown looking absolutely floored as she spies Jake standing in front of the bistro in Horton Town Square. Gabi has a major reaction, and she ends up fainting on the spot!

Jake then runs up to Gabi, who has just collapsed on the ground, and asks her if she’s all right. Gabi just looks up at Jake in complete shock. Of course, Gabi will soon be very confused as Jake wonders what is going on with all these people acting like he’s someone else.

But what’s Gabi going to do the she manages to pick herself up off the ground? Well, according to a recent interview of Brandon Barash in SOD, Gabi will be very persistent with Jake, so it sounds like she might insist that he’s not really Jake, but that he’s Stefan! That would, of course, make perfect sense given how passionate Gabi was about Stefan.

But it looks like the manner in which Jake responds to Gabi won’t be at all Stefan-like. In fact, the character of Jake is going to be very different than Stefan in that he’s much more rough around the edges. Jake is obviously a blue-collar guy, and it sounds like he’s going to have a lot of attitude. Of course, Stefan had a lot of attitude as well, but they’ll definitely be different guys totally.

In the coming days, DOOL spoilers say that Gabi will reach out to her brother Rafe Hernandez (Galen Gering) for help, so she might want Rafe to do a background check on Jake and see what the deal is. It sounds like Gabi might be REALLY hoping that somehow this is Stefan and that he survived, so she’ll probably be on a mission to prove it.

We should note, too, that fans are delighted with this particular DOOL preview. It’s what droves of “Stabi” fans have been waiting for, and those fans are excited beyond belief. In response to the promo, one fan said: “#STABI heat is palpable in just a few seconds on screen.”

And another fan commented: “Omg this is better than I could have ever imagined. #StabiNation we made it!” Someone else said: “So excited for next week and their upcoming story!! It’s been a long 6 months…yay my #Stabi are back and still hot.”

At any rate, Jake will be on the scene this week, so stay tuned to the NBC soap! We’ll be sure to let you know as more DOOL news becomes available. Remember, CDL is your go-to source for all the latest Days of Our Lives news and spoilers!