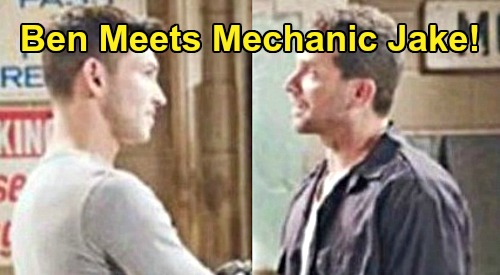 Days of Our Lives (DOOL) spoilers update for Friday, April 24, teases that Gabi DiMera (Camila Banus) will long for Stefan DiMera (Brandon Barash) and the happy future they were supposed to have. Gabi just saw Stefan DiMera’s (Brandon Barash) reflection in a town square store window, so she’ll be shaken for a moment. Once Gabi sees that Stefan isn’t anywhere in sight, she’ll move past the incident for now.

Gabi will tell herself that Stefan’s dead and gone, so she’ll wind up in the cemetery on Friday. Things haven’t been going very well for Gabi, especially since she was denied the DiMera CEO seat and lost Gabi Chic. However, Gabi will refuse to let any of this keep her down. She’ll find some new path to joy and will wish Stefan was there to share in it with her.

At Julie’s Place, Chad DiMera (Billy Flynn) and Abigail DiMera (Kate Mansi) will celebrate Chad’s big win. Li Shin (Remington Hoffman) put Chad in charge over Gabi, so they’ll remain thrilled about that in Friday’s episode. Days of Our Lives spoilers say will come along and rain on their parade a bit later, so look for “Chabby’s” night to take a turn toward conflict.

Elsewhere, Ben Weston (Robert Scott Wilson) will get the shock of his life. DOOL fans can expect Ben to run into someone who looks exactly like Stefan DiMera (Brandon Barash)! Days spoilers confirm Barash will be playing Jake Lambert, who’s a mechanic at a motorcycle garage.

Ben will reel over Jake and Stefan’s resemblance, but is Jake a completely different person or perhaps Stefan after all? Time will tell, but Ben will just know this is crazy! He’ll struggle to believe his eyes as he meets Jake and tries to process all this.

Next, Sonny Kiriakis (Freddie Smith) will find Victor Kiriakis (John Aniston) after Kristen DiMera (Stacy Haiduk) leaves him to die. Days of Our Lives spoilers say Sonny will see blood and worry as Victor loses consciousness. He’ll grab his phone and get the paramedics over there to take Victor to the hospital.

Kayla Brady (Mary Beth Evans) will leap into action soon after. While Kayla does her best to save Victor’s life, Sonny and Ciara Brady (Victoria Konefal) will wonder who could’ve done this. It’s possible they’ll consider Kristen as a suspect, but Brady Black (Eric Martsolf) definitely will after he gets updates on this stabbing.

Brady will inform Kristen that Victor was in cahoots with Xander Kiriakis (Paul Telfer) on the baby switch. Kristen won’t seem taken aback, so Brady will determine that she already found out.

After a call comes in about Victor being stabbed and rushed to the hospital for treatment, a stunned Brady will gape at Kristen. He’ll immediately fear this is Kristen’s doing and worry about how he’ll undo the damage.

Brady will soon form a plan to help Kristen, but Xander will be busy trying to help Sarah Horton (Linsey Godfrey) for now. He managed to get in touch with Sarah in Paris, but it seems she’ll reject his desperate plea. Sarah’s made it this far on her own, so she may tell Xander to back off and leave her alone.

Days spoilers say Sarah will stick around Paris, which could prove to be a mistake since Rex Brady (Kyle Lowder) will run into her there next week. Sarah will land in another tight spot eventually, so stay tuned. We’ll give you the latest DOOL news as it comes in. CDL’s the place to be for thrilling Days of Our Lives spoilers, news and updates.