Days of Our Lives Spoilers: Brady Goes To Extremes To Protect Kristen For Stabbing Victor – Conspires To Hide Violent Crime 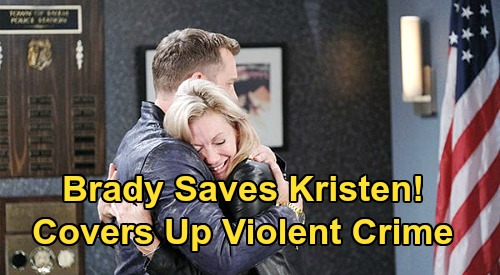 Days of Our Lives (DOOL) spoilers tease that Kristen DiMera (Stacy Haiduk) is in a real predicament of her own making. As DOOL viewers know, Kristen recently found out that her daughter Rachel Black is alive, and she’s beside herself with worry and anger. Kristen is deeply concerned because Sarah Horton (Linsey Godfrey) has run off with Rachel, as she’s unwilling to hand the little girl over.

Kristen is also furious with Xander Kiriakis (Paul Telfer) for perpetrating the baby switch in the first place. She gave Xander a piece of her mind, and when she realized that Victor Kiriakis (John Aniston) was the mastermind behind the baby switch, she really had it out for him.

Kristen has put up with a lot from Victor over the years, and she was out for blood…literally.

Well, as DOOL viewers know, Kristen went to see Victor at the Kiriakis mansion, and she certainly said her peace. But Victor gave Kristen some attitude back, and he was pretty flippant about the whole situation.

So Kristen exacted her own type of justice, picking up a knife from the nearby cheese tray and stabbing Victor as he sat helplessly in his chair. From here, it looks like Kristen will flee and regroup with Brady Black (Eric Martsolf) as Victor is eventually found by Sonny Kiriakis (Freddie Smith) and rushed to the hospital.

Well, according to Days of Our Lives spoilers, Brady will eventually realize that something is up with Kristen. Of course, Brady knows full well that Kristen tends to have extreme reactions when she gets bad news. After all, Kristen ended up pushing Haley Chen (Thia Megia) down a staircase after she learned that Rachel had “died.”

Brady will notice that Kristen is acting strangely, and DOOL spoilers say that very soon thereafter, he’ll go to extremes to protect her. That sure sounds like he’s going to help her cover up her crime, which should be feasible, at least until Victor wakes up.

But Brady might think that he can eventually convince Victor not to reveal who stabbed him, so Brady could do something rash, like get rid of the knife or other evidence of Kristen’s crime.

It seems that Brady won’t want to see Kristen get wrapped up with attempted murder charges while she’s on the verge of getting their daughter Rachel back, so he’ll likely make some big moves to keep her safe and protected.

Of course, this will probably leave Brady seriously conflicted, but on some level, he’ll understand what Kristen did because he’ll be upset with Victor, too.

We’ll see what happens here, but it certainly looks like Brady will be on the path to obfuscating evidence and protecting his love Kristen in the coming days. Do you think that Kristen will ever go down for stabbing Victor?

Stay tuned to the NBC soap and remember that we’re here for you with all the hot new DOOL spoilers and news. Keep CDL bookmarked for the exciting updates!