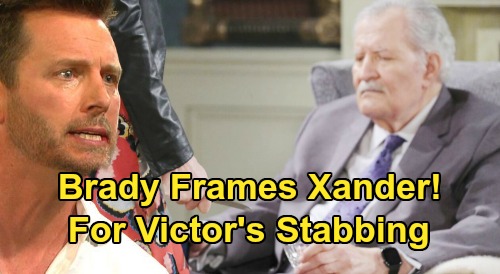 Days of Our Lives (DOOL) spoilers tease that Brady Black (Eric Martsolf) will worry about his family’s future. After Brady realizes Victor Kiriakis (John Aniston) was involved in the baby swap, he’ll plan to break the news to Kristen DiMera (Stacy Haiduk). Brady will hate to add to Kristen’s anger, but he’ll want her to know the whole truth.

Of course, Brady won’t realize Kristen already knows! By then, Kristen will have pried the truth out of Xander Kiriakis (Paul Telfer) and taken vengeful action. Days of Our Lives spoilers say Kristen will stab Victor and leave him to die, so that’ll lead to a horrifying phone call for Brady.

Once Brady gets updates on Victor’s near-death experience, he’ll immediately suspect Kristen was behind the stabbing. It looks like Kristen will be hauled down to the station for questioning, but DOOL spoilers say Brady will make a bold move that changes the game.

It’s possible that Brady will try to take the blame himself, but perhaps there’s a better option here. Why not frame Xander Kiriakis (Paul Telfer) instead? It would serve Xander right for letting Will Horton (Chandler Massey) sit behind bars for a crime he didn’t commit. It would also serve as sweet revenge for Brady as well as Victor.

Days of Our Lives spoilers say Victor will be livid with Xander before this stabbing goes down. He’ll feel like Xander was an idiot for botching their plan and causing so much pain.

Maggie Kiriakis (Suzanne Rogers) is going to suffer, which is the last thing Victor wants. As much as Victor hates Kristen, he may be willing to let Xander take the fall.

That’s especially true if Brady pitches this as a way to make things right. Brady might suggest that there’s hope for their relationship, but Victor has to meet him halfway.

Since Victor robbed Brady and Kristen of all that time with their child, the least Victor can do is lie and claim Xander stabbed him. In return, Victor might agree that Xander can take all the baby switch blame.

Days spoilers say Eli Grant (Lamon Archey) will grill Victor shortly after he wakes up in the hospital. Will Brady get to Victor first and tell him to leave Kristen out of the story? Will Brady and Victor set Xander up for attempted murder?

That’d certainly be a good strategy to keep the “Bristen” family intact. Brady won’t want Kristen to be separated from Rachel DiMera Black once they’re reunited. This might be the best solution to keep the three of them together, but it’d mean more trouble for Xander!

It sounds like Xander’s problems are about to get worse, so Days fans will want to stay tuned. DOOL’s got even more Salem shockers in store. Don’t forget to pop back in CDL frequently for terrific Days of Our Lives spoilers, updates and news.