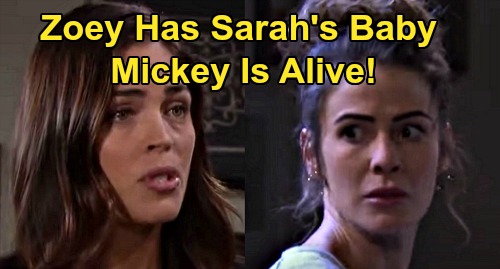 Days of Our Lives (DOOL) spoilers tease that a shocking twist could be brewing in the baby switch storyline. This consider all the evidence and try to figure out where this storyline’s headed next. For starters, we should talk about some DOOL buzz that could turn out to be true.

Back before the time jump, there was a ton of information floating around. It was tough to figure out which leaks were true, but some of them indeed ended up being legit – like Steve Johnson (Stephen Nichols) having Stefano’s memories implanted.

There was also talk about a third baby potentially being caught up in this swap storyline, so that’s something to keep in mind.

It seems like a done deal that Rachel DiMera Black is indeed Kristen DiMera (Stacy Haiduk) and Brady Black’s (Eric Martsolf) child. Kristen saw that heart-shaped birth mark immediately after giving birth and always felt a strong pull to Rachel, who was living as Mackenzie “Mickey” Horton. However, what if there was another swap involved that night?

DOOL fans may recall that Dr. Amanda Raynor (Victoria Platt) was busy delivering another baby before she could help Kristen deliver her own. Whose baby was that? Now let’s throw in a few more puzzle pieces.

Back in January, Days of Our Lives spoilers pointed to Orpheus (George DelHoyo) returning when all the time jump flashbacks occurred. Orpheus didn’t return until much later, but was there a reason for the confusion? Perhaps Orpheus indeed shot flashbacks that haven’t aired yet.

That makes sense considering Orpheus and Evan Frears aka Christian Maddox (Brock Kelly) have some big secret they haven’t revealed yet. There’ll probably be a flashback when the time comes, right?

Orpheus insisted that Evan’s sister, Zoey Burge (Kelly Thiebaud), didn’t need to know everything. He ultimately added that no one needed to know what they did.

So what exactly did Orpheus and Evan do? Why are they so determined to keep Zoey out of the loop? Clearly, Zoey’s pretty relaxed when it comes to her brother and father’s criminal behavior.

This secret must be something particularly terrible or something that would specifically hurt Zoey – and we’re betting it’s the latter.

Evan also brought up the fact that Zoey is a great mom and added that their kids are cousins. It may be significant that Days writers went out of their way to mention that. If we put all this together, is it possible that Zoey’s baby is the only one that died that night?

Orpheus has a soft spot for his kids and will go to great lengths for them. What if Orpheus and Evan swapped Zoey’s dead baby for Sarah’s Mickey, who was then swapped with Brady and Kristen’s Rachel by Xander Kiriakis (Paul Telfer)? In other words, CDL can exclusively reveal that Zoey may be raising the real Mickey right now! That sounds like a messy twist that would change everything.