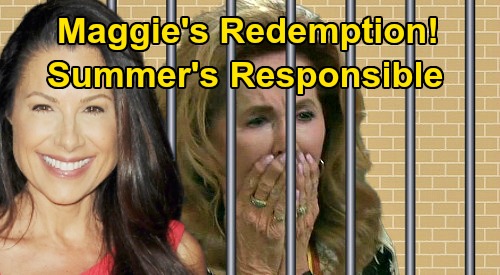 Days of Our Lives (DOOL) spoilers tease that Maggie Kiriakis (Suzanne Rogers) will soon be in for a world of hurt. As DOOL viewers know, Maggie recently refused a plea deal and chose to go to prison for driving drunk and causing the accident that killed Adrienne Kiriakis (Judi Evans). Maggie felt that she deserved to do her time, and she feels like it’s the right way to honor Adrienne’s memory.

But soon, Maggie will get some more terrible news. Julie Williams (Susan Seaforth Hayes) will visit Maggie in prison, and it looks like she may be the person tasked with telling Maggie what’s happened with respect to the baby swap.

Maggie will have to hear all about how Sarah Horton’s (Linsey Godfrey) baby died shortly after arriving at the hospital, and it probably won’t take long for Maggie to put together what must have happened.

Maggie’s going to be absolutely horrified to learn that her actions resulted in the death of her own granddaughter, and then she’ll have the added horror of hearing that Sarah has taken the baby she’s raised as her own all these months and gone on the run.

Maggie will learn about how Xander Kiriakis (Paul Telfer) and her own husband Victor Kiriakis (John Aniston) switched babies and caused this terrible mess.

And knowing Maggie, she’ll probably blame herself for the entire situation, reasoning that if she hadn’t caused the accident that night, then there would have been no baby death, and no reason for Xander and Victor to switch babies in the first place.

Maggie is probably going into a very dark place very quickly – and she’ll have nothing but time on her hands in prison to think about it. Well, all of this means that Maggie is going to be in prison for a very long time, especially if she gets additional prison time for causing the death of Sarah’s baby.

But surely something’s got to give here – after all, it doesn’t seem like Maggie’s going to be able to stay incarcerated on the show for the long haul, nor that TBPB are going to have a major and beloved character like Maggie responsible for two deaths, including a little baby.

DOOL buzz is that Maggie’s story has a big twist coming, and that probably means that she didn’t cause the accident after all. DOOL viewers will remember that the reason Maggie drank on the night of the accident was because her daughter Summer Townsend (Marie Wilson) visited earlier that evening and said some utterly horrible things.

Summer said that she was a drunk, just like Maggie, and she went on to disparage her mom. And that means that Summer was out on the roads that night too, so it’s entirely possible that Summer caused the accident, and not Maggie.

Summer could have been out driving in the area, possibly drunk herself, and swerved into Adrienne’s lane that night. Summer might not have even known that she did anything wrong, especially if she was driving drunk and happened to swerve, then drove away from the scene.

At any rate, it seems like we’re going to need a good Maggie redemption story at some point down the road, so that Maggie can get out of prison and back to her life…and so that she can stop torturing herself over what she’s going to believe that she’s done.

Do you think we’ll find out that Summer was the cause of the accident on that fateful night? Stick with Days of Our Lives on NBC and keep coming back to CDL for all the latest DOOL news. We’ve got your hot new spoilers and updates right here!