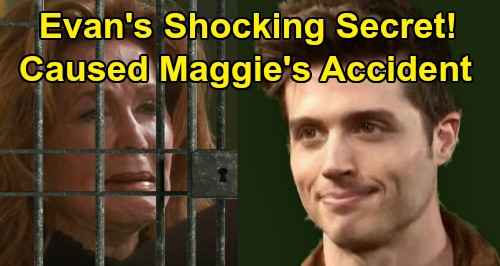 Days of Our Lives (DOOL) spoilers reveal that Evan Frears aka Christian Maddox (Brock Kelly) will make a confession during the week of April 27-May 1. However, Orpheus (George DelHoyo) was clear about not filling Zoey Burge (Kelly Thiebaud) in on everything. Evan knows it’d be a mistake to go against Orpheus’ wishes, so this confession may not provide the whole story.

DOOL fans can expect Evan to reveal HIS secret to Zoey, but Orpheus insisted no one needed to know what THEY did. In other words, we’re probably dealing with a couple different secrets. Evan’s been full of ‘em since he first appeared on the scene, so he might as well add another!

Based on all the clues Days has provided, it’s possible Evan and Orpheus were behind a third baby switch. Zoey’s dying baby may have been swapped for Sarah Horton’s (Linsey Godfrey) perfectly fine little girl.

That means Zoey may have the real Mickey and not know it. Regardless, that doesn’t seem like something Evan would just blurt out to Zoey. Evan obviously has a pact with Orpheus, so any baby switch news is something they’d want to keep to themselves.

As Orpheus pointed out, they need Zoey on their side. Evan surely wouldn’t risk revealing that Zoey’s daughter isn’t really hers. Just look at how Sarah reacted to Xander’s confession!

Evan could kiss any hope of getting off the hook goodbye without Zoey’s help. He’s counting on Zoey to get him cleared of Jordan Ridgeway’s (Chrishell Stause) murder.

In other words, the third baby swap certainly may have happened, but it’s probably not the secret Evan’s going to reveal here. Days of Our Lives spoilers specify this is Evan’s secret. Orpheus alluded to something they both did, so more secrets should be revealed later – perhaps secrets that tie in with Evan’s initial one.

So what did Evan potentially do alone? Some Days fans suspect Jordan could still be alive, but why would Evan be hiding that? It would help his case if Jordan survived, so he already would’ve spilled it by now. Evan’s desperate for anything that’ll help him keep his son.

That brings us to another possibility. Could David Ridgeway’s (Caleb and Kyler Ends) father actually be someone else? It’s worth mulling over, but Evan seems 100-percent convinced David is his child.

Days might take an alternate paternity route with David at some point, but Evan definitely doesn’t seem in the loop. This secret has to be something Evan knows and can blab to Zoey.

So let’s consider a surprising option. Could Evan have caused the accident that Maggie Kiriakis (Suzanne Rogers) believes she caused? Days of Our Lives writers need a way to get Maggie out of this mess.

The potential baby swap we mentioned would take care of the Mickey part. Making Evan to blame for the crash would also clear Maggie of wrongdoing in Adrienne Kiriakis’ (Judi Evans) death.

Plus, Evan’s story has always been very intertwined with Sonny Kiriakis (Freddie Smith), Will Horton (Chandler Massey) and Ben Weston (Robert Scott Wilson). Everything has been so connected.

If Evan caused the accident that put Will behind bars and killed Sonny’s mom, that’d be a massive twist for Sonny. He would’ve fallen for the guy responsible for all his pain.

Maybe Orpheus stepped in and saw Maggie as an easy target to frame. Did Orpheus plant that booze in Maggie’s car? Maggie doesn’t even remember taking the first sip.

Xander may have gotten the wrong idea and framed Will, which honestly worked out better for Evan anyway. That cleared Evan’s romantic path to Sonny. Again, these storylines all seem so linked.

DOOL spoilers say some shocking twists are brewing, so stay tuned to hear what Evan admits to Zoey. Do you think Evan caused the accident that killed Adrienne?

Did Evan call Orpheus to help him cover it up? As other Days news comes in, we’ll pass along more updates. CDL’s your hotspot for great Days of Our Lives spoilers, updates and news.