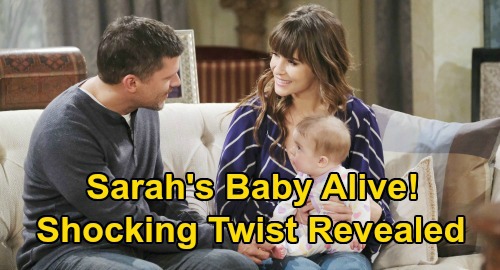 Days of Our Lives (DOOL) spoilers tease that Sarah Horton (Linsey Godfrey) will eventually face the most difficult task she could imagine. DOOL fans know Sarah’s on the run with Mackenzie “Mickey” Horton, who she recently learned is Rachel DiMera Black. Sarah naturally still feels like Rachel’s her daughter, so she’s been reluctant to part with her.

However, Sarah will ultimately have to say a true goodbye to Rachel. Kristen DiMera (Stacy Haiduk) and Brady Black (Eric Martsolf) are desperate to build their happy family – and they’ll ultimately get that chance. Where does that leave heartbroken Sarah and Eric Brady (Greg Vaughan)? Is there any light at the end of this long, dark tunnel?

There might be a miracle waiting based on some recent clues. Days viewers heard Orpheus (George DelHoyo) and Evan Frears aka Christian Maddox (Brock Kelly) discussing a secret. Orpheus insisted that Zoey Burge (Kelly Thiebaud) didn’t need to know everything. This baddie wants to keep what happened from Zoey and everyone else.

Of course, Orpheus could’ve just thrown this in with his list of latest crimes. Orpheus was given full immunity, so that would’ve been the time. Since Orpheus kept quiet and doesn’t want to tell Zoey, there’s something big going on here.

Zoey fought to defend Orpheus and Evan despite all their horrible behavior. What’s one more crime? Why not just come clean to Zoey and let her help them? The reason is most likely because Zoey’s at the center of their secret. The truth could probably hurt Zoey, which is something neither Orpheus nor Evan would want to do.

During Evan’s recent heart-to-heart with Zoey, he reflected on what a great mom she is. Evan mentioned how their kids are cousins and added that he wants them to grow up having that family bond.

We also know there was a mom unaccounted for on Mother’s Day at the hospital. Dr. Amanda Raynor (Victoria Platt) was a bit late to help Kristen DiMera (Stacy Haiduk) because she was off delivering another baby. Days of Our Lives has certainly laid all the groundwork for a third baby switch.

It makes sense that Zoey’s baby might’ve died on Mother’s Day. Evan and Orpheus may have orchestrated their own baby swap – one that was separate from the Xander Kiriakis (Paul Telfer) and Victor Kiriakis (John Aniston) drama that came later.

So let’s break this down. Zoey’s baby potentially dies right as Sarah’s perfectly healthy one appears ripe for the taking. That would explain Sarah’s baby taking a sudden turn for the worse. That would’ve been after Orpheus and Evan’s swap. Then, Xander unknowingly switches an already switched baby! Xander would’ve been swapping Kristen and Brady’s kid for Zoey’s.

That would also mean the real Mickey – the one Sarah gave birth to on the side of the road – is actually alive and well. Zoey may have no idea she’s been caring for Sarah’s child. Naturally, this would be great news for Maggie Kiriakis (Suzanne Rogers), who wouldn’t have killed her grandbaby after all.

It would bring some joy at the end of this storyline for Sarah and Eric, too. This baby wouldn’t replace Rachel in their hearts, but Eric and Sarah would still have a chance to know their true child. They’re losing Rachel, but they would be gaining the real Mickey.

We’ll offer updates as other Days details become available. Days of Our Lives spoilers say Zoey will remain a crucial part of the action in the coming weeks, so this extra baby swap shocker may explode!

Do you think Eric and Sarah will ultimately be reunited with their biological daughter? Does Zoey have the baby Sarah gave birth to? DOOL fans won’t want to miss the stunning twists ahead! Be sure to stop by CDL for more Days of Our Lives spoilers, updates and news.