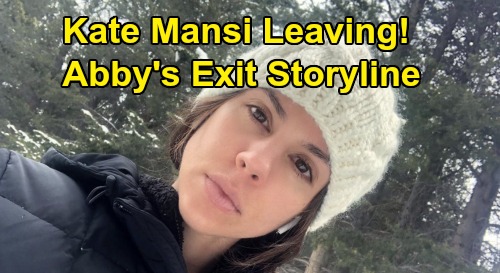 Days of Our Lives (DOOL) spoilers tease that Abigail Deveraux DiMera (Kate Mansi) will be relieved to know the source of her struggles. DOOL fans saw how terrifying it was for Abigail to suddenly start hallucinating again. The hallucinations themselves were deeply disturbing and left a panicked Abigail in fear for her loved ones. It’s those hallucinations that may ultimately drive Abigail out of Salem.

Thankfully, Abigail hasn’t relapsed, and there’s a good explanation for why she’s seeing things that aren’t there. After the test results came back, Chad DiMera (Billy Flynn) relayed the news that Abigail was drugged. Days spoilers say Abigail and Chad will naturally want to figure out who was behind this.

Despite Chad’s suspicions about Gabi DiMera (Camila Banus), she seems to be in the clear. Days wouldn’t go for such an obvious culprit – especially when that culprit didn’t even have time to put this drugging scheme in motion. Gabi’s been too caught up in Stefan DiMera (Brandon Barash) grief to focus on Chad and Abigail’s payback just yet.

Once Chad and Abby rule out Gabi, they’ll contemplate other suspects. That won’t be an easy task since Abigail doesn’t have a ton of enemies. Orpheus (George DelHoyo) is nearly everyone’s adversary, but like Gabi, he’s been too busy to bother with Abigail.

Days of Our Lives spoilers suggest Orpheus will stay focused on David Ridgeway (Caleb and Kyler Ends) in the coming weeks. Abigail doesn’t even seem on Orpheus’ radar, so Chad and Abby will face a real challenge.

Unfortunately, Abigail will continue to battle hallucinations during the week of May 4-8. That suggests the drugging culprit will keep at it, so Abigail will be in real trouble here. How can Abigail remain in Salem if there’s a crazy person running around drugging her?

This person’s bound to get creative so that Abigail doesn’t suspect when it’s happening – no matter how careful Abby is with her beverages. The culprit may even find other ways to strike. It’s clear that Abigail’s a target, so will Abby have to leave town for her own safety? That’s one option to consider.

Abigail might think it’s best to catch a flight out of Salem and head back to her Paris apartment, which sneaky Sarah Horton (Linsey Godfrey) happens to be staying in. Of course, Abigail could take the kids with her and get caught up in her old life there. Chad and Abigail might end up doing long-distance for a while, even after the drugging culprit is caught.

Then again, it’s possible these drugs will take a toll on Abigail’s mental well-being. If Abigail eventually starts hallucinating on her own, that might be another reason for Abigail to leave town. She might pay Dr. Laura Horton (Jaime Lynn Bauer) a visit in hopes of getting back on track without being institutionalized.

However, it seems more likely that Abigail will leave out of fear or just as a precaution. Marlena Evans (Deidre Hall) evaluated Abigail and suggested she was OK mentally. Unless Abigail takes a major turn for the worse, we can probably expect her to leave on a positive note.