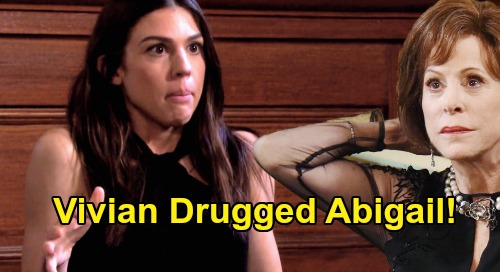 There’s no confirmation yet on who drugged Abigail, but now’s the time to speculate! Days of Our Lives created a mystery, so we might as well mull it over and try to crack the case. There are some crucial clues that might help as this DOOL storyline heats up.

We know devious Vivian Alamain (Louise Sorel) is set to make a comeback this spring, so the timing of her return stint is interesting. Could Vivian be the one drugging Abigail? This would be a great way to bring Vivian back on canvas. It would put Vivian in the action again before she sees Jake Lambert (Brandon Barash) and demands answers.

Of course, Vivian would need a motive for going after Abigail. She’s certainly capable of doing something like this, but why exactly? During Vivian’s last Days stint, she ranted over Stefan making a fool over himself. Vivian wasn’t happy about Stefan’s obsession with “Gabby,” so maybe she viewed unstable Abigail as the start of all his problems.

Like Gabi DiMera (Camila Banus), Vivian might feel like Stefan’s being erased – like his legacy as a DiMera doesn’t matter and never did. That’s the kind of thing that would leave Vivian furious and out for revenge.

Vivian also happens to know her way around the DiMera mansion, which means she could’ve slipped in undetected to drug Abigail.

Days of Our Lives spoilers say Vivian will definitely stir up some trouble when Louise Sorel pops up again this spring. Will Vivian be revealed as the person who drugged Abigail? It’ll be exciting to see the conclusion of this hot plot!

As other Days news comes in, we’ll keep you posted on all the latest updates. Abigail’s hallucinations will continue in the week ahead, so stay tuned. DOOL fans won’t want to miss the twists and turns ahead. CDL’s your go-to source for fantastic Days of Our Lives spoilers, updates and news posts.