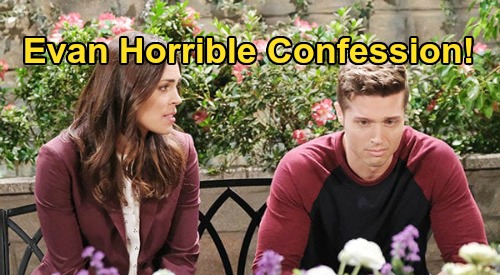 Days of Our Lives (DOOL) spoilers update for Wednesday, April 29, teases that John Black (Drake Hogestyn) will make a decision that he’ll soon regret. Trusting Orpheus (George DelHoyo) in any capacity is a mistake, but John may have to learn that the hard way. Orpheus will present a tempting offer in Wednesday’s episode – that that appeals to John as a father who wants to help his son.

Since Orpheus brought up the idea of a mutually beneficial alliance, Days spoilers say John will hear him out. He won’t see what it could hurt to listen. However, John’s mistake may come through accepting Orpheus’ offer. He’s letting his guard down, so that could set up John’s kidnapping – which is coming up during May sweeps.

Over with Evan, he’ll make a major confession to Zoey Burge (Kelly Thiebaud). Zoey wants to be prepared as she goes up against Rafe Hernandez (Galen Gering). She figures Rafe’s attorney will be digging for any dirt he can find – and Zoey’s right about that.

Justin Kiriakis (Wally Kurth) recently had a strategy session with Rafe about making Zoey and her whole family look worse than Rafe. Since Rafe’s got family members who have done time, that hurts his chances. Zoey’s a blood relative, so that automatically carries more weight.

Since Rafe and Justin will be working twice as hard to trash Zoey, Evan and Orpheus, it’s important for Zoey to know any big secrets in advance. Zoey doesn’t want any courtroom DOOL shockers throwing her off her game.

Days of Our Lives spoilers say Evan won’t reveal everything, but he’ll offer up some crucial details on Wednesday. Evan’s admission will throw Zoey for a loop, but she’ll ultimately stand by Evan as her brother and her client.

At the hospital, Kayla Brady (Mary Beth Evans) will give Steve Johnson (Stephen Nichols) some help with his patch. Since Steve’s eye can’t be repaired, he’ll be using his trademark eyewear. Steve’s reaction to that news said it all. He basically shrugged off losing his other eye since he’s been through this before.

That patch is pretty much part of Steve at this point. It’s almost integral to his character, which is exactly why Days injured Steve’s eye beyond repair again. Although Steve’s fine with the patch, his wounded eye is personal.

Kayla’s someone that Steve trusts to see it and not judge him for it. As Kayla removes the bandage and puts the patch on instead, it’ll bring an electric yet tender moment.

Hope will butt in before Kayla and Steve can lock lips, but they’ll probably be on the verge of it. Steve and Kayla will feel some sizzle between them, but they’ll ultimately shut it down. Kayla will excuse herself to gather up Steve’s release papers. She’ll get updates on Steve’s plans to stay with Hope, so that’ll sting somewhat.

Kayla wishes things could be different, but this is where she’s at right now. Between Steve’s stubbornness and Kayla’s lingering love for Justin, there are too many “Stayla” obstacles. Steve and Kayla will reunite down the road, but they’ll shove their feelings aside for now.

Other Days of Our Lives spoilers say Chad DiMera (Billy Flynn) will blame Gabi DiMera (Camila Banus) for drugging Abigail DiMera (Kate Mansi). Since a drug was in Abigail’s system and caused her hallucinations, Chad will think Gabi’s the only logical culprit. He’ll demand that Rafe arrest his sister, but Gabi will naturally protest.

Once Gabi has a chance to defend herself, Rafe may agree there’s no evidence of Chad’s claims. When exactly would Gabi have drugged Abigail? Gabi just vowed revenge, but she couldn’t make it happen instantly!

Besides, Gabi seems to be leaning toward payback through a legal route this time. She talked about a lawsuit, which would be better than threatening her future with Arianna Horton (Sydney Brower) again. Chad may eventually realize Gabi isn’t responsible, so he’ll have to go back to the drawing board and figure out who is.

Abigail and Chad’s storyline has some exciting twists in store, so DOOL fans will want to stay tuned. CDL’s your go-to source for hot Days of Our Lives spoilers, updates and news posts.